Mar 31, 2015: The Federalist: Let’s Reinvigorate Public Discourse, Not Shut it Down
The assumption that disagreement entails fear or hatred is unwarranted, because pejorative labels terminate discourse, but also because, as Brandon Ambrosino says, “It degrades the foundation that undergirds a democratic, pluralistic society.”
​
Dec 4, 2014: Red State: Voxsplaining the Pope
Amborsino is tasked to explain to the lumpen proletarian “What did Pope Francis mean when he said children should grow up with a father and mother?” Interesting because I would have thought turning to a dictionary would have cleared up what the really big words “father” and “mother” mean.
​
Sept 6, 2014: Live Action News: The infanticide in “The Giver” was an abortion, as far as Planned Parenthood is concerned
Vox writer Brandon Ambrosino made the following statement in an article that juxtaposed the different treatments of abortion found in Obvious Child and The Giver, respectively: To be clear, what happens in The Giver is not an abortion. The babies killed by Jonas’ father have already been born, and have lived outside of the womb for several months. What Father kills are not fetuses, and there isn’t any debate in his society about whether or not the babies are alive. There is debate, however, about whether the babies are fit to be alive, about whether they are viable — and therein lies the comparison for pro-lifers. 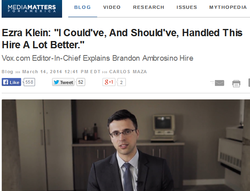 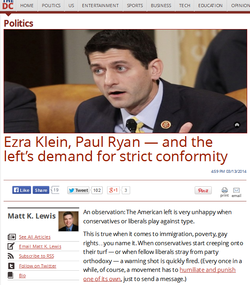 ON THE RECORD: Mar 13, 2014: In an article about the intolerant left, Matt K Lewis (Daily Caller)  reports about some problems Paul Ryan having as he addresses some inner city poverty and has now been tagged by some from the left as racist. Lewis proposes that "Ryan was digging in too much — getting too close to the other guy’s turf." and then reports that "Something similar is taking place right now with liberal Ezra Klein, who is being labeled something of a homophobe. Okay, it’s not to that level…yet — but he is clearly being told that, when it comes to staffing up his new online venture, Vox, he had better get in line. His decision to hire “gay anti-gay apologist Brandon Ambrosino” seems to have sparked the outrage. As the American Prospect notes, “Klein has come under fire for the lack of racial and gender diversity among Vox’s announced hires, and his decision to hire Ambrosino shows how much he has to learn about genuine diversity.”  As I have said over and over and over again, the ones that have spent the last 20 years complaining about how intolerant people are have now become the people they used to call intolerant. (SOURCE: Daily Caller: "Ezra Klein, Paul Ryan — and the left’s demand for strict conformity")
​
​Mar 12, 2014: Media Matters: Meet Brandon Ambrosino, Homophobes' Favorite Gay Writer And Vox's Newest Hire
Ezra Klein's much-hyped news and policy site, Vox.com, has hired Brandon Ambrosino - a gay man who has made a name for himself by suggesting that being gay is a choice and whitewashing anti-gay bigotry and discrimination.