Jan 3, 2022: Virtue Online: Former Southern Baptist Preacher Beth Moore Joins the Anglican Church in North America
By contrast, another woman, Paula White a televangelist and prosperity preacher took a different tack and fawned all over Trump, winning plaudits for doing so. White led the 70-member group, which includes evangelical leaders who backed the former president. She gushed over Trump, calling out "all the great work he had done."

Sept 19, 2021:
The first church I went to eventually dived into prosperity teaching nonsense. The experience has left me somewhat discerning and I avoid those type of churches....like Joel Osteen, Paula White, Ken Copeland and a host of others. My late mother use to listen to Osteen because she said he made her "feel good." Eating cheesecake makes me feel good...I would hope to get something more out of church then the feeling that I just ate some cheesecake.
Sept 7, 2021: Christianity Today: ​Trump’s Faith Advisers Reconvene in New Initiative
Paula White leads the 70-member group, which includes evangelical leaders who backed the former president.
Sept 7, 2021: Baptist News Global: ​Angels from Africa: Reckoning with the New Apostolic Reformation
Two days after Joe Biden was declared winner of the 2020 presidential election, Paula White, the ex-president’s thrice-married spiritual advisor, launched into a stunning rant. “I hear victory in the corridors of heaven,” White told her congregation, in a staccato, machine-gun cadence. “Angels have even been dispatched from Africa right now. They’re coming here, in the name of Jesus, from South America.” The angelic mission, apparently, was to “stop the steal.”
Aug 12, 2021: Briefly: Suzanne Hinn's biography: What happened to Benny Hinn's wife?
On the contrary, it is alleged that Suzanne Hinn's husband had an extra-marital affair with fellow minister Paula White. Benny explained that although they were spotted coming out of a hotel in Rome while holding hands, he and Paula were platonic friends. He admitted cutting ties with Paula to save his marriage. 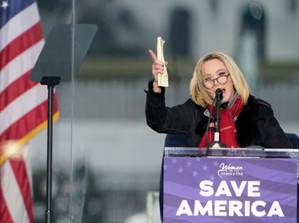 Paula White at Rally in DC on Jan 6, 2021
​Paula White prayer in DC on Jan 6, 2021:
​… God, you said you honor your word and your name above all things. So as we hold you, in covenant with you, today, let justice be done. Let justice be done. Let justice be done. Let we the people have the assurance of a fair and a just election. Hear our cry and turn our hearts to you. God, I pray that you would turn the hearts of those who are in power and position to make decisions, to walk in your wisdom, and to do justly today — for the integrity of democracy. For our nation.
God, we ask right now, in conclusion, for your provision. For your protection. For your power. For an outpouring of your spirit like never before. I secure POTUS — I thank you for President Trump. I thank you that he has stood with Israel. He has stood with life. He has stood for righteousness. He has stood for the most vulnerable. He has stood to alleviate poverty. He has stood for religious freedom. He has stood for safety and protection. He has stood in a place, God, that few men could stand. He has walked in your ways. And as you have allowed me to have a relationship with him and his family for 20 years, right now, as his pastor I put a hedge of protection around him. I secure his purpose. I secure his destiny. I secure his life, God, and I thank you that he will walk in a holy boldness and a wisdom, God, and that you will go before him. You will be his rear guard, and you will go in front of him this day and every day, God. …
March 31, 2020: National Interest: Mistake: Trump's Evangelical Allies Ignore Science When It Comes To Coronavirus
Florida-based Paula White-Cain, chair of the president’s evangelical advisory board and the person who prayed over President Trump before his swearing inaddressed her many followers on March 17 regarding coronavirus in a Facebook update.

She has received many awards for her work, including the Rosa Parks Lifetime Achievement Award in 2013, Impact Leadership Award in 2011; the Humanitarian Award by the Trumpet Award Foundation in 2009; the Behind the Bench "Mind, Body, Spirit Award" from the NBA Wives Organization in 2007, and the "Trailblazer Award" by Jesse Jackson and Rainbow Coalition in 2006. In many of her sermons, empowerment seminars, and books Paula White discusses her childhood traumas to teach about God's transforming power. Her style has been described as humorous and candid.