Ron Desantis, who surrounds reporters with sycophants who cheer his answers and jeer the press (on rare occasions when they are allowed to ask questions), just had a citizen arrested for peacefully attempting to observe the presser in a public building. pic.twitter.com/62siI33PCh

Dec 28, 2021: ArcaMax: ​Editorial: DeSantis proposes to waste $5.7 million chasing election fraud ghosts
​As Donald Trump, that sorest of sore losers, was demonizing thousands of dedicated poll workers and election officials in the states he lost, Gov. Ron DeSantis repeatedly assured Floridians that nothing went amiss here. The votes were counted swiftly, audited routinely, and certified without complaint.
Dec 23, 2021: The Pantagraph: ​LETTER: All that matters is what Trump says
​The governor of Florida, Ron DeSantis, just announced a new bill that would deputize parents to sue school districts, (like the law in Texas that allows anyone to sue anyone who tries to get an abortion in violation of their new six week law) if CRT is inferred. 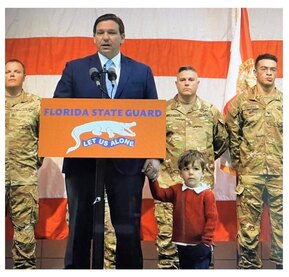 The "Militia" and the child and the podium, Reminiscent of past dictators in third world countries
Nov 12, 2021: Weekly Challenger: ‘Beat DeSantis’ message to Crist at FAMU epic homecoming
Holt waved her Crist sign saying, “We need a Governor!” The crowd chanted, “Beat DeSantis,” “DeSantis has got to go,” while Crist added, “We’ll do it together!” When popular DJ Joe Bullard announced Crist as he passed the reviewing stand, his popularity was again on display.
Nov 5, 2021: Miami Herald: DeSantis’ office doesn’t have to testify in lawsuit over controversial election law, judge says
A federal judge has shielded seven Republican lawmakers and Gov. Ron DeSantis’ office from having to testify about a controversial new elections law — including testifying about any involvement by the governor’s office in trying to block three University of Florida professors from serving as expert witnesses. 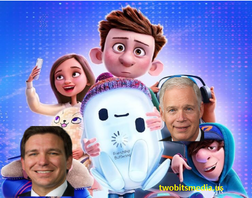 I saw a commercial for "Rons Gone Wrong" and just naturally assumed it was about Sen Ron Johnson and Ron DeSantis.
But its about a Cartoon for Halloween instead of a Cartoon in the Senate and a Cartoon as a governor.
Sept 3, 2021: Christian Post: ​Pelosi plans vote for abortion rights bill as states eye Texas-style ban
​Florida’s Republican Gov. Ron DeSantis, widely seen as a 2024 presidential hopeful, did not definitively say whether he would sign such a bill into law should it reach his desk: “What they did in Texas was interesting and I haven’t really been able to look enough about it. They’ve basically done this through private right of action.”
Aug 24, 2021: CNN: ​With cases in Florida surging, DeSantis and Biden square off over coronavirus response
​President Joe Biden and Florida Gov. Ron DeSantis have found their chosen rhetorical rivals in the fight against the coronavirus: each other. And neither seems eager to back down anytime soon.

The second shortest verse in the Republican Bible is "Rudy's hair wept."😎