TWO BITS MEDIA OF SOUTH MISSISSIPPI
Dec 29, 2021: Shreveport Times: ​LDH: Omicron cases continue to climb. Unvaccinated make up largest portion
​The Louisiana Department of Health estimates the proportion of omicron cases in the state is 88.5% for the week ending Dec. 25.
LDH’s estimate for the omicron proportion is preliminary and subject to change as more sequencing data are reported, according to a news release.
The CDC estimates the proportion of Omicron in HHS Region 6 (which includes Arkansas, Louisiana, New Mexico, Oklahoma and Texas) is 86.7%, with 95% of parishes at the two highest levels of community transmission.

​December 29, 2021:
Behind gates on a golf course in Spring,  there is a parsonage - identified in 2013 paperwork as the home of Champions Community Church Founding Pastor Steve Austin - boasts a pool and hot tub with fountains, wine grotto and outdoor kitchen. Zillow says it's worth over $1 million. He pays ZERO taxes on it because its designated a "parsonage" One of several in the state of Texas. When the tax bills come due, the residents of the area have to make up the difference (loss) for school districts or other things property taxes are designated for. In other words the pastor who thinks he is getting a free ride is actually being paid for by his neighbors .
In Travis County, Texas the 3,700-square-foot Austin Presbyterian Theological Seminary parsonage set on slightly less than an acre is appraised at $3.33 million. If it weren’t designated a parsonage, the property’s owner would contribute $72,500 a year in taxes.
Dec 23, 2021: Church Leadership: ​Ed Stetzer: The Church and Donald Trump: We Need Christ at the Center of Our Services, Not Democrats, Republicans or Any Other Politician
The First Baptist Church of Dallas, Texas, was for many years one of the most prominent churches in the Southern Baptist Convention. It was brought to prominence in the 20th century under legendary pastors George Truett and W.A. Criswell, whose two pastorates spanned 97 years. The church still carries much weight, especially among older and more traditional Southern Baptists.

December 23, 2021:
​A group of unvaccinated people who attended a conspiracy conference all became sick after the Reawaken America stop in Dallas.
The conspiracy theorists think they were attacked with anthrax, instead of blaming the superspreader event they just attended🙄
Dec 19, 2021: Palestine Herald Press: Texas hits new employment record as unemployment rate continues to drop
​The number of unemployed workers in Texas dropped to a new low in November with more Texans employed than at any other time on record, according to Texas Workforce Commission data.
The November unemployment rate in the state is 5.2%, down 0.2% from October, and is nearing pre-pandemic levels after 20 months.
Dec 18, 2021: Victoria Advocate: Some say there’s more work to be done after library keeps controversial books
​“The 21 books is just a tiny little bit that we were able to review, but there are many, many more books like (“Let’s Talk About It: The Teen’s Guide to Sex, Relationships and Being a Human”) that we haven’t even approached,” said Bonnie Cantrell to the board Wednesday. “The entire section needs to be looked at.” 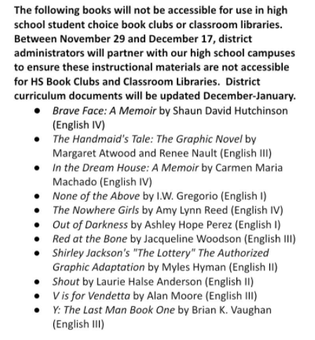 November 5, 2021:
A GOP Texas state lawmaker is asking schools to report whether they have any of the 850 books he identified that deal with sexuality, racism, abortion and U.S. history that he says "might make students feel discomfort, guilt ... or psychological distress."
This is an authoritarian effort at reshaping the emotions so that lying & persecution can proceed without "guilt" or  "discomfort" or other expressions of the conscience. Textbooks will have to feed their agenda in complete disregard for what is true or what is real.
It's the early stages of Fascism whereas the beginning has already been sown into the fabric of what is making much of the GOP tick. Enter the evangelicals that have long been driven by a "what I feel" form of the gospel and suddenly the weirdness of things like QAnon and other conspiracies take root and begin to flourish. "Feelings" and "Faith" when forming political ideologies is generally a toxic mix that has no boundaries. Hence, John Kennedy can become Keith Richards and rather than mock it they embrace it cuz, as the person I quoted yesterday (Neese) says "it feels like something happened so it did".
When they began to spin the idea that anyone in their way..especially Democrats...are "evil" and "godless" and "socialists and communists" along with "baby killers" their break from reality began.
There is no Biblical remedy as they confirm among themselves a "form of godliness" yet they lack the power thereof."
The days of America as we knew it...may very well be gone already.
Oct 16, 2021: Blog Talk Radio: Texas school district pulls books by Black author Jerry Craft amid CRT claim
Black Author, Jerry Craft has books pulled, speech postponed by Texas School District pulls books, amid false, Critical Race Theory claims; Ahmaud Arbery: Travis McMichael, One of the alleged killers of Ahmaud doesn’t want photos of Confederate Flag vanity license plate admitted in court.
Oct 13, 2021: Texas Tribune: GOP state Rep. Lyle Larson, who has increasingly broken with his party, won’t seek reelection
State Rep. Lyle Larson, R-San Antonio, who bucked his party on a number of major issues this year, announced Wednesday he will not seek reelection.
Oct 12, 2021: Texas Tribune: Trump won Hood County in a landslide. His supporters still hounded the elections administrator until she resigned.
Michele Carew, an elections administrator with 14 years of experience, has resigned after a monthslong campaign by Trump loyalists to oust her. “I’m leaving on my own accord,” she said.
Oct 12, 2021: Yahoo: White House says 'politics' is behind Texas governor's executive order banning vaccine mandates
Asked Tuesday about the purported motivation for Abbott’s move, White House press secretary Jen Psaki answered bluntly, with a single word: “Politics.” The two Republican governors have also led the party’s resistance to school-based mask mandates. President Biden had previously criticized that fight as motivated purely by political considerations.
Oct 12, 2021: WXXV: Justice Department again presses to halt Texas abortion law
The Biden administration urged the courts again to step in and suspend a new Texas law that has banned most abortions since early September, as clinics hundreds of miles away remain busy with Texas patients making long journeys to get care.
Sept 29, 2021: Washington News Day: Julian Castro believes Beto O’Rourke has a chance to defeat Greg Abbott in the Texas governor’s race.
Former congressman Beto O’Rourke, according to Democratic politician Julian Castro, has a chance to unseat Governor Greg Abbott as Texas’ next governor.
Sept 21, 2021: Dallas Voice: ​The Texas abortion law leaves a variety of questions open
​A number of questions about the new Texas abortion law have come up as the first case has been filed against a doctor who claims he performed an abortion.
Sept 14, 2021: The Leaflet: ​The Texas ‘Heartbeat Bill’: A Blow to Abortion Rights in the U.S.
REPRODUCTIVE rights have been the subject of a long-standing debate that is often carried out without the required sensitivity, considering how it directly affects a woman’s autonomy over her own body. This battle for abortion rights in the U.S. has recently suffered a major setback as the government of the state of Texas successfully passed the ‘heartbeat bill’ to functionally ban all abortions in the state.
Sept 8, 2021: Sojourners: TEXAS CLERGY ARE TAKING A STAND AGAINST THE NEW ABORTION LAW
​When the Supreme Court last week refused to block a new Texas law — which bans abortion after about six weeks of pregnancy and allows private citizens to sue abortion providers and anyone who “aids or abets” someone getting an abortion after six weeks — faith groups like Texas Right to Life and the Texas Catholic Conference of Bishops applauded.

Sept 7, 2021:
Texas Gov Abbott said that rape is illegal in Texas and since it is Texans are going to eliminate it. I wonder how many other states are having success eliminating rape by making it illegal?​
Sept 6, 2021: Yahoo: ​Justice Department will 'protect' abortion seekers in Texas
The Justice Department said Monday that it will not tolerate violence against anyone who is trying to obtain an abortion in Texas as federal officials explore options to challenge a new state law that bans most abortions.