Sept 10, 2021: ​Hello Magazine: Amy Robach shares emotional post with fans ahead of heartbreaking 9/11 anniversary
​The Good Morning America star took to social media to tell fans that she would be reporting from the National September 11 Memorial & Museum in New York City, and said that Friday was a "crisp September day so reminiscent of 9/11".
​Mar 23, 2015: UGA Today: Amy Robach of ‘Good Morning America’ to deliver UGA’s spring Commencement address
"Good Morning America" anchor Amy Robach will give undergraduates one final charge on May 8 before the University of Georgia sends its newest alumni off with a fireworks farewell. The spring Commencement ceremony will begin at 7 p.m. in Sanford Stadium.

The best part of September? Probably the, "ptem." But I don't have a strong opinion about it.. 😎

​Oct 10, 2014: People: Amy Robach One Year After Cancer: 'I'm Almost at 100 Percent'
It's not the happiest anniversary, but Good Morning America host Amy Robach is making the best of it.
Apr 26, 2014: Zap2It: 'Good Morning America' anchor Amy Robach completes her breast cancer chemotherapy
"Good Morning America" anchor Amy Robach has been documenting her experience with breast cancer on her ABC morning show, and the reporter shared some good news Friday (April 25): She's finished her final round of chemotherapy.
Apr 2, 2014: TV Newser: Josh Elliott On His ‘GMA’ Replacement: ‘A Phenomenal Journalist and a Brilliant Woman’
Josh Elliott has nothing but good things to say about the person who has taken over his duties on “Good Morning America.” “She’s one of my very favorite people,” Elliott says of Amy Robach.
Dec 18, 2013: Wall Street Journal: Amy Robach and Andrew Shue Land Rental in Lower Manhattan
The couple has rented a triplex penthouse in a Financial District building developed by the Moinian Group. According to the listing, the apartment has more than 3,100 square feet, five bedrooms and 5 ½ bathrooms. It was listed with an asking rent of $16,800 per month. The unit has a private elevator, according to the listing.
Dec 5, 2013: New York Daily News: Amy Robach returns to ‘Good Morning America': Reporter shares details of breast cancer battle, reveals she faces months of chemotherapy
The reporter told her 'GMA' costars that this

There's two secrets to success:
1) Never Tell everything you know

​Dec 4, 2013; New York Daily: Amy Robach opens up on breast cancer battle: ‘I’ve sobbed myself to sleep’
Robach has returned to work, though she has not yet appeared on air, after undergoing a double mastectomy. The news reporter said she has been taking an ‘aggressive’ approach to treat her cancer and will still undergo chemotherapy.

Nov 11, 2013: ABC News: ABC News’ Amy Robach Reveals Breast Cancer Diagnosis
I remember exactly where I was when I got the call from a “Good Morning America” producer. 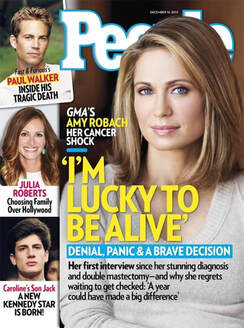 ​Amy Joanne Robach (born February 6, 1973, St. Joseph, Michigan) is an American television journalist and correspondent for ABC News. Previously, she was a national correspondent for NBC News, co-host of the Saturday edition of NBC's Today and anchor on MSNBC. She rotates with 20/20 anchor Elizabeth Vargas, if Robin Roberts is on personal time or on assignment. Robach made the announcement about switching networks on May 19, 2012. Robach appears on ABC's Good Morning America program as a correspondent.