July 4, 2021: The Georgia Straight: Climate Cassandra Guy McPherson makes a case that scientists, IPCC, and media underplay the crisis
He revealed that on September 10, 2015, celebrity science commentator Bill Nye visited his home to film part of an episode of National Geographic Explorer. It was called Bill Nye's Global Meltdown.
In the video, Arnold Schwarzenegger played Nye's therapist, which McPherson described as "hilarious".
But McPherson's video is anything but amusing—it's actually deadly serious.

First rule of Mime Club is: DON'T TALK ABOUT ANYTHING, EVER.

"The best response to fear is to live free of it. And be as
gracious as you can be." --Doug Wilson

July 28, 2016: CNS: Bill Nye the Philosophy Shy: Science Didn’t Just Happen
Socrates said that wisdom consists in knowing that you know nothing. If that’s true, a few of our brightest scientists need some enlightenment.
​
Apr 2, 2016: Christian Post: Bill Nye the Science Guy Doesn't Get Philosophy
Bill Nye "the Science Guy" took on the subject last month in a Big Think video on YouTube. A philosophy student contacted Nye to ask whether he, like so many atheist scientists, considers philosophy a "meaningless topic."
​
​Apr 15, 2015: Business Insider: Neil deGrasse Tyson: Bill Nye doesn't stand a chance against me in a cage match
Astrophysicist and StarTalk Radio host Neil deGrasse Tyson counts Bill Nye as one of his best friends. But what happens if you pit the two against each other in a cage match? "I really don't think he stands a chance," Tyson tells us.

Sept 10, 2014: Caffienated Thoughts: Bill Nye is Clueless About Common Core and Its Opposition
Bill Nye spouts off about “core curriculum.”  He says if he were king he would make sure math and science are in the core.
​
Sept 1, 2014: Techly: Bill Nye the Science Guy says we can find alien life within 20 years, but we’re looking in the wrong place
Bill Nye the Science Guy believes we’ll find extraterrestrial life within the next 20 years, all for the cost of “barely [a] cup of coffee per taxpayer”. And while Mars is the neighbour we most often scour for ET, Nye says we should be searching Jupiter’s moon of Europa.

Feb 18, 2014: Last Resistance: Bill Nye The “Science” Guy Doesn’t Know North From South
In a canned “debate” with Congress(wo)man Marsha Blackburn on David Gregory’s Meet the Press, Bill Nye held up a picture of the Arctic and asked, “Would you say the Antarctic has less ice than it used to?”

Feb 17, 2014: The Wire: Fact-Checking the Bill Nye-Marsha Blackburn Climate Change 'Debate'
If you are not the sort of person who watches Meet the Press (because you are not an old person), you may have missed Sunday's "debate" between Tennessee Rep. Marsha Blackburn and Mr. William Nye, Science Guy. Allow me to summarize: There is no actual debate over climate change. Allow me to summarize at greater length: Blackburn was full of misinformation and Nye seemed sleepy.

Feb 5, 2014: Global Post: No debate about it, Bill Nye dissected Ken Ham in creation-evolution discussion
This we can’t argue: Bill Nye’s debate with Ken Ham on Tuesday night in Kentucky sparked healthy discussion about heady topics. After that, well … it gets tougher.

Feb 5, 2014: Forward Progressive: Bill Nye Embarrasses Ken Ham Even More on CNN Following Debate (VIDEO)
When I heard that Bill Nye would be having a debate with creationist Ken Ham, I figured it would be mostly comical.  I also assumed it would be about an hour or so long.  The second part I was definitely wrong about.

Feb 1, 2014: Sensous Curmudgeon: Ready for the Bill Nye-Ken Ham Debate?
There’s very little going on that’s worth blogging about, so we’ll talk about the upcoming debate between Bill Nye and Ken Ham. 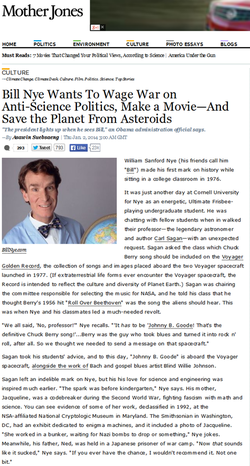 ​
On THE RECORD: Jan 4, 2014: .Mother Jones has a puff piece about Bill Nye (written by Asawin Suebsaeng). It's titled "Bill Nye Wants To Wage War on Anti-Science Politics, Make a Movie—And Save the Planet From Asteroids" and that appears to sum it up also. After a mini-bio of his life it says: "But of his new endeavors, he's likely best known for his politically tinged, no-bullshit talk about science education in America. Over the past few years, he's gained wide attention on social media, the lecture circuit, and television (he's appeared on CNN's Piers Morgan Live and HBO’s Real Time with Bill Maher, among others) for countering creationist drivel, conservative politicians' claims, and climate change denial." When asked what his three top political passions are he responds: "Climate change, raise the standard of women around the world through education, asteroids." Yes, Nye is really into asteroids—specifically, fighting the ones that may imperil human civilization. "Sooner or later we're going to have to deflect an asteroid," Nye says. "And we're the first generation that can do something about it." I'm not sure why an asteroid would wait to crash toward earth until we are ready to deflect it, but, I'm not Bill Nye the science guy, either.............
Christian Post: Richard Dawkins Foundation Slams Upcoming Ken Ham, Bill Nye Debate for 'Offering Credibility' to Creationism
Latin Post: Four People Most Important to America's Future: Elon Musk, Bill Nye, and Mary Gonzales (Plus One You Wouldn't Expect)
Pasadena Star News: Chat Replay: Bill Nye the Science Guy talks science, evolution
Amy Ridenour: Bill Nye the Science Guy Tries to Have It Both Ways on Climate Change
Space News: Nye: NASA’s Asteroid Mission Concept Won’t Happen