Sept 20, 2021: Christianity Today: Hillsong founder Brian Houston steps down from church board ahead of court case
The founder of Hillsong Church, Brian Houston, has announced his decision to step down from the board ahead of a court case into what he knew about his father's abuse.
July 6, 2021: Reclaim The Net: New South Wales bans church singing due to COVID – even over Zoom
In Australia, Pastor Brian Houston of the Hillsong Church spoke out against the order as a form of anti-religious discrimination, saying that the to ban singing in churches for the purpose of live streaming the act was “just not right” – and urging others in a post on Twitter to “make a stand.”

There is no "I" in team; but there are three in Multiple Personality Disorder:-)
Jan 11, 2015: Youtube: Hillsong TV // My Faith - My Strength, Pt4 with Brian Houston
Do you focus on the things that are coming against you or do you see the power of faith just stare those things down? What's on the other side of your current challenge? In this message Ps Brian Houston speaks a message on your faith being your strength.
Oct 10, 2014: Christian Today: Brian Houston denies abuse compensation cover-up
Hillsong senior pastor Brian Houston has today denied claims that he tried to mask his involvement in paying 'compensation' to a man who was sexually abused as a child by his father.
Sept 18, 2014: Christian Today: Child abuse investigation into Frank Houston, father of Hillsong lead pastor Brian Houston
Child abuse allegations against Frank Houston, the father of Hillsong's lead pastor Brian Houston, are to be investigated by a national inquiry, the Guardian reports.
Sept 9, 2014: New York Times: Megachurch With a Beat Lures a Young Flock
“These are tough, hard, dry towns for contemporary churches,” said Brian Houston, the Sydney-based senior pastor of the Hillsong empire. “We want to be strategic, and really impact cities of influence, so that the influence can reach far beyond.”
May 19, 2014: Faith Village: Hillsong: The Original Pioneer Pt. 2 | Brian Houston
"What does it mean to you to pioneer again? Does pioneering represent only things that are external? In this message, Hillsong Pastor Brian Houston speaks about the original pioneer, Jesus who pioneers something wonderful in our heart."
May 17, 2014: The Narrowing Path: Hillsong Pastor Brian Houston’s Continual Abuse Of Scripture by Cameron Buettel
Following on from the previous series of articles by Cameron Buettel, the author further reflects on the unrepentant false teaching Brian Houston persistently engages in.
Mar 28, 2014: Christian Post: Hillsong Church Pastor Brian Houston Denies Promoting 'Chrislam;' Says Sermon Taken Out of Context
Brian C. Houston, leader of one of the world's largest Christian churches, is denying allegations that he promotes "Chrislam," a theological blend of Christianity and Islam, after stating in a December 2013 sermon, "Do you know – take it all the way back into the Old Testament and the Muslim and you, we actually serve the same God. Allah to a Muslim, to us Abba Father God." 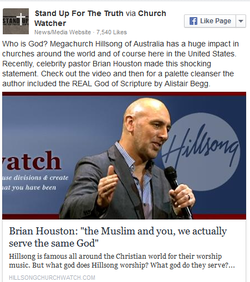 On The Record: Mar 17, 2014: If Brian Houston does indeed preach the Christian gospel as he claims, then he would know that the Muslim and Christian faiths are incompatible. But, Houston said in a congregational message at Hillsong Church: “How do you view God? In a desert there’s two types of birds: there’s vultures and there’s hummingbirds. One lives off dead carcasses, rotting meat. The other lives off the beautiful, sweet nectar in a particular flower on a particular desert plant. In the same desert, they both find what they’re looking for. Do you know – take it all the way back into the Old Testament and the Muslim and you, we actually serve the same God. Allah to a Muslim, to us Abba Father God. And of course through history, those views have changed greatly. But lets make sure that we view God through the eyes of Jesus, the grace of the Lord Jesus Christ, the beauty of a Saviour, the loving open inclusive arms of a loving God. And that way we’ll lead out of that and you’ll be purposeful about your leadership and you’ll draw people just like the Lord Jesus always does through the power of the Holy Spirit.” (SOURCE: Amy Spreeman: Stand Up For The Truth: "Hillsong’s surprising statement about “Allah” ")

Sept 10, 2013: Christian Post: Hillsong Pastor Brian Houston Announces Australia Megachurch's Expansion to So. California
Hillsong Church is setting its sails for the shores of Southern California. Brian Houston, founding pastor of the Sydney, Australia, megachurch that already has 11 congregations worldwide, announced that his son would be packing his bags for Los Angeles to start tilling the ground for what is likely to be another fruitful Hillsong church plant.
Brian Houston (born 17 February 1954 in Auckland, New Zealand) is a pastor in the Australian Christian Churches. He is currently the Senior Pastor at Hillsong Church which has locations in Sydney, Brisbane and Melbourne in Australia, London, Cape Town, Kiev, Germany, Paris, Moscow, Stockholm, New York City and Copenhagen. He was also the National President of Australian Christian Churches from 1997 to 2009. The denomination is the Australian branch of the Assemblies of God.