June 27, 2021: MilleLacs Messenger: Koinonia ‘The older I get, the less I know’
For those wanting more, I recommend to you Brian McLaren’s recent book, Faith After Doubt.
Aug 27, 2020: Religious News Service: More than 350 faith leaders to back Biden for president, including many first-time endorsers​
​Other endorsers — most of whom organizers said are acting as individuals and not on behalf of their affiliated organizations — include a number of liberal-leaning voices, such as the Rev. Nadia Bolz-Weber, an author and Lutheran pastor; David Gushee, an author and Christian ethicist; David Beckmann, president emeritus of the Christian organization Bread for the World; Diana Butler Bass, author and historian of religion; Rabbi Jack Moline, head of Interfaith Alliance; Ron Sider, founder of Evangelicals for Social Action; the Rev. Jacqui Lewis, pastor at Middle Collegiate Church in New York City; Rabbi Sharon Brous, head of IKAR Jewish community in California; Valarie Kaur, Sikh activist and head of the Revolutionary Love Project; Anju Bhargava, former member of Barack Obama's Advisory Council on Faith Based and Neighborhood Partnerships and board member of the Hindu American Seva Communities; Imam Talib Shareef of Masjid Muhammad, also known as “The Nation’s Mosque”; Greg M. Epstein, Humanist chaplain at Harvard and MIT; and Brian McLaren, Christian author and activist.
June 6, 2015: Luke Norsworthy: Brian McLaren: Phyllis Tickle’s Legacy
Brian McLaren returns to the show to discuss the legacy of Phyllis Tickle, the questions that sustained the Emergence Church, Gatekeepers, The Righteous Mind, the scandal of continual incarnation, racism, Phyllis Tickle: Evangelist of the Future and Luke’s silly questions.
Apr 5, 2015: Brian McLaren: The Uprising Begins: An Easter Sunday Reflection
Sept 4, 2014: Christian Today: Brian McLaren: 'We've entered a new era of Bible reading'
We've moved into a new era of approaching the Bible, controversial Christian author and speaker Brian McLaren says. It's an era that could see Christians abandoning the idea that there is one 'right' way of interpreting Scripture – an era he calls Bible 3.0.
May 1, 2014: Challies.com: The False Teachers: Brian McLaren
Today we turn to a man who helped lead the Emerging Church and who was once named by TIME as one of the 25 Most Influential Evangelicals in America. Brian McLaren 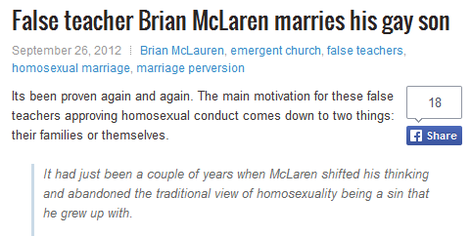 Gay Christian Movement Watch: September 26, 2012   Brian McLauren, emergent church, false teachers, homosexual marriage, marriage perversion
Its been proven again and again. The main motivation for these false teachers approving homosexual conduct comes down to two things: their families or themselves. It had just been a couple of years when McLaren shifted his thinking and abandoned the traditional view of homosexuality being a sin that he grew up with. “I had gone through my change in this view before I ever guessed that any of my kids might be gay,” he said on the radio program.” [source]
How very convenient, Mr. McLaren. Either way, putting either one over the will of God is idolatrous but idolatry isn’t a big concern with false teachers.
We’ve reported on Brian McLaren and his emergent church loonies here, here and here. As a leader in the emergent church movement, GCM Watch was the first to tell you that a marriage of the two false ideologies was inevitable. Both are cut from the same doctrinal error cloth. The lies false teachers tell are always self-serving.  Always. The ones who spit out the gay is not a sin lie are profiting and personally benefitting from the telling of lies.
McLaren was the co-performer of his son’s “wedding” to another man in Washington.
Mar 23, 2011: Albert Mohler: A Theological Conversation Worth Having: A Response to Brian McLaren
That is why a recent essay by Brian McLaren helps us all to understand what is at stake in the controversy over Rob Bell’s new book, Love Wins. Beyond this, his argument reveals a great deal about the actual beliefs and trajectories of what has become known as the emerging church. As such, his essay is a welcome addition to this important conversation.

Brian D. McLaren (born 1956) is a prominent Christian pastor, author, activist and speaker and leading figure in the emerging church movement. McLaren is also associated with postmodern Christianity and progressive Christianity and is a major figure in post-evangelical thought. He has often been named one of the most influential Christian leaders in America and was recognized by Time Magazine as one of the 25 Most Influential Evangelicals in America in 2005. McLaren was also the founding pastor of Cedar Ridge Community Church in Spencerville, Maryland, which he left in 2006 to pursue writing and speaking full-time.