Mar 31, 2015: Danthropology: CJ Werleman Calls New Atheists “White Supremacists”
In a recent series of Tweets, CJ Werleman has attempted to call New Atheists to task. His usual kinds of arguments against anti-theism have, to me, occasionally merited a brief mention behind the likes of Reza Aslan or Glenn Greenwald. But now I feel Harris might have taken the most appropriate actions with Werleman by vowing never to write about him again.
Mar 19, 2015: Godless Spellchecker: CJ Werleman Can’t Be A Journalist – If Facts and Evidence Matter
It’s been a devastatingly embarrassing six months for author and columnist CJ Werleman. Exposed for misrepresentation, serial plagiarism and probable sockpuppetry – and this was all before Sam Harris effortlessly spanked his ill-judged libellous accusations. Both Salon and Alternet dropped Werleman as a result, the latter completely removing his articles from their archives altogether. The only platform still willing to publish him is Middle East Eye. It’s a self-immolation that is painful to look at – yet I can’t seem to help myself.
Jan 21, 2015: CJ Werleman: Middle East Eye: American Sniper mirrors the war on terror propaganda
Jan 14, 2015: CJ Werleman: Middle East Eye: The convenient myth of radicalisation
Dec 4, 2014: CJ Werleman: Middle East Eye: Why I don't criticise Islam 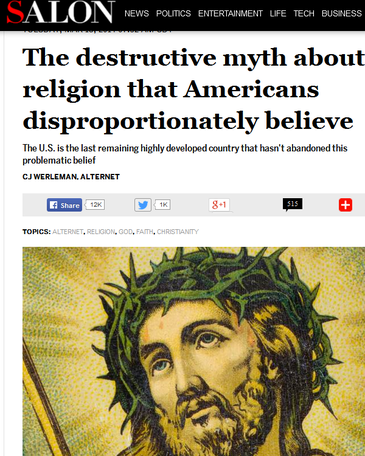 ON THE RECORD: Nov 18, 2014: Matthew Flannagan:  I have been focusing a lot in my thinking, writing and research on questions of the relationship between religion and morality. One particular frustration I encounter in this topic is the, unfortunately common, tendency for writers and researchers to conflate separate questions and subsequently give answers to the wrong questions thinking they have answered the right ones. A good example is article which was sent to me via e-mail recently entitled “The destructive myth about religion that Americans disproportionately believe.” (written by CJ Werleman) The article comments on a recent survey which found that the majority of people in certain parts of the world, including the United States of America, believe that belief in God is essential for morality. The author considers this a “destructive myth”. His rebuttal involves two premises: (a) he interprets the survey’s results to mean that the majority of people believe you cannot live a morally good life unless you believe in God; (b) he aims to refute this by appealing to some unsourced crime statistics that suggest atheists do not commit disproportionately more crimes than theists.

I think his reasoning on both points is mistaken, before getting into why, I note that this article proposes to be about whether belief in God is essential to morality; it is not about the related, though separate, question of whether the existence of morality depends on the existence of God.

Turning to the first premise (a), the article opens with:

“Pew Research Center published the results of a survey conducted among 40,080 people in 40 countries between 2011 and 2013. The survey asked a simple question: Is belief in God essential to morality? While clear majorities say it is necessary, the U.S. continues to be an outlier. In 22 of the 40 countries surveyed, the majority says it is necessary to believe in God in order to be a moral person. “This position is highly prevalent, if not universal, in Africa and the Middle East,” says the report.”

This is confused. The author states the question asked was: “Is belief in God essential to morality?” The author then interprets those answering in the affirmative as saying “it is necessary to believe in God in order to be a moral person.” This does not follow from the affirmative answer. The question asked was whether belief in God is essential to the institution of morality itself; such a question is asking whether the institution needs this belief. The question did not ask what attributes were necessary to be a moral person.

Not only are these separate issues, they are logically distinct.

To see this let us briefly ask the question why do people think that belief in God is necessary for morality? I think the reason is typically based on a conjunction of two ideas.

The first is that a person cannot be rationally committed to always doing the right thing unless they believe, explicitly or implicitly, that the world is ordered so that commitment is not inconsistent with their own long term happiness.  If this belief is false, then there will be cases where doing the right thing involves a significant sacrifice of one’s happiness and self-interest,  and when such cases occur, it is difficult to see why moral reasons must trump or always be overriding.

The second is that atheism tends to undermine this belief. If a person believes the world is created and providentially ordered by a loving and just God, he or she will have reasons to think the world is ordered so that being committed to doing the right thing does not disadvantage people in the long run. Atheists, however, lack reasons for thinking this is the case and arguably have, given their atheism, good reasons for denying such beliefs.

The upshot of both these ideas is that a person cannot rationally be committed to always doing the right thing, to the overriding authority of morality, if he or she does not believe in God. To have rational authority over people’s actions, morality requires belief in God or something like divine providence.

I don not have space to document it here but I believe something like this line of reasoning is behind the popularity of the claim that morality requires belief in God.  What is important to note, however, is that this line of reasoning does not mean atheists cannot be committed to living a moral life and or that they can do so successfully. The argument is that the atheist who is committed to moralitys overriding authority lacks rational justification for his or her commitment. The fact a person lacks justification for commitment does not mean he or she cannot have commitment. People can be, and often are, committed to things they cannot rationally justify. When atheists contend that  religious commitment is irrational they grant this very point.

The first premise, (a), is therefore mistaken; claiming belief in God is necessary for morality does not entail atheists cannot live morally upright lives.

Suppose, however, we assume for the sake of argument that this premise is true. This brings us to the second premise, (b); the author argues:

“So what of the U.S.? A comparatively eye-popping 53 percent of Americans essentially believe atheists and agnostics are living in sin. Despite the fact that a research analyst at the Federal Bureau of Prisons determined that atheists are thoroughly underrepresented in the places where rapists, thieves and murderers invariably end up: prisons. While atheists make upward of 15 percent of the U.S. population, they only make up 0.2 percent of the prison population.”

The appeal to atheist incarceration rates is one I have seen on several freethinker cites recently (they often appear to be based on self-reported statistics of prisoners who are seeking parole and data tends to not be provided as to their belief at the time of arrest, among other issues). One line of response to this sort of rebuttal is to call into question the figures cited and some of the problems with the figures are recorded here. In this post I want to put this response to one side and instead focus on two problems with any appeal to crime statistics in this context. --More