MSNBC: In Kari Lake and Tudor Dixon, the GOP offers a cynical alternative to Trump
In that declaration, and in her refusal to say if she will accept election results if she loses the Arizona gubernatorial election, the former local TV news anchor was merely doing an impression of a previous candidate for office who ascended an escalator more than seven years ago, ushering in a new brand of made-for-TV politics. “I’m a reporter, I’ve been sitting on your side of the desk for a long time,” Lake told CNN’s Dana Bash, while casting skepticism on the U.S. electoral system. 10.17.22
Nov 14, 2014: News Busters: Dana Bash Laments: New Senate GOP Leaders 'Half a Dozen White Men'
Dana Bash is not one to put aside her biases in the name of journalism. As Matthew Balan reported just last week, the CNN Capitol Hill correspondent appeared on Anderson Cooper 360 to blame Senate Republicans for the “dysfunction” in the federal government

Sept 27, 2014: Breitbart: CNN Media Reporter Shames Colleagues for Not Giving Sarah Palin Benefit of Doubt
Brianna Keiler, a normally poised and polished host who was subbing for host Wolf Blitzer, Dana Bash, Candy Crowley, and Suzanne Malveau just could not get enough of the story.

Sept 10, 2014: Daily Caller: NO BOREDOM HERE: David Gregory To Moderate A Panel
David Gregory isn’t sitting around eating bonbons since NBC and Meet the Press cut him to the curb. Next week the ex-MTP moderator will take his moderating skills to a panel for No Labels, a group that promotes bipartisanship around the nation. Of note: CNN’s Dana Bash will also be a moderator.
​
June 16, 2014: da Tech on Da Radio Blog: Dana Bash & the Scourge of SRASS (Sudden Republican Anti-Semitism Syndrome)
One of the reasons why CNN is still an important network is their coverage of medical news and this Saturday Dana Bash one of the top reporters at CNN looking at the Eric Cantor defeat has noticed such a phenomena
June 15, 2014: Huffington Post: CNN's Dana Bash On Eric Cantor Interview: 'I Tried To Get Him Off His Talking Points'
CNN's Chief Congressional Correspondent Dana Bash spoke about her interview tactics on Sunday just moments after interviewing House Majority Leader Eric Cantor (R-Va.).
May 27, 2014: Breitbart:  CNN, Clarion-Ledger: Thad Cochran hides, does 'bait-and-switch' on national reporters
Sen. Thad Cochran (R-MS) pulled the old “bait-and-switch” to avoid a televised CNN interview, reporter Dana Bash says.
Feb 25, 2014: MediaIte: AZ Gov. Brewer Prevaricates on ‘Anti-LGBT’ Bill: ‘I’ll Do the Right Thing for Arizona’
CNN’s Dana Bash pressed Arizona Governor Jan Brewer Monday night as to her plans for SB 1062, a bill that would allow businesses to refuse service to members of the LGBT community, and one that many, including the state’s two Republicans senators and some of the lawmakers who voted for the bill, have urged the governor to veto. 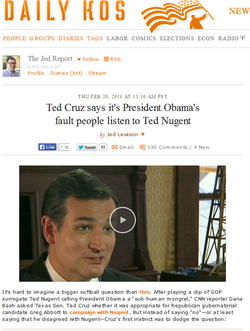 ​ON THE RECORD: Feb 20, 2014: Jed Lewison (Daily Kos) has an article: "Ted Cruz says it's President Obama's fault people listen to Ted Nugent." It recounts a conversation Dana Bash (CNN) had with Ted Cruz about some comments made by Ted Nugent. It begins:  "After playing a clip of GOP surrogate Ted Nugent calling President Obama a "sub-human mongrel," CNN reporter Dana Bash asked Texas Sen. Ted Cruz whether it was appropriate for Republican gubernatorial candidate Greg Abbott to campaign with Nugent." The article builds from there but all I want to address is that sentence as the premise for Bash asking anything about Nugent to Ted Cruz. Bash, and people on the same page as her on this (which are numerous) don't seem to know anything about Ted Nugent. As a good journalist it is important to know who your subjects are. It appears that Bash is accepting the same premise as Lewison when he called Nugent a "GOP surrogate." Nugent maybe lots of things but one thing he is not is any political party's surrogate. If anyone has taken the time to listen to Nugent they know that Nugent shoots from the hip. His words are seldom eloquently phrased but that is one of several reasons why so many people are enamored  with him. People like Dana Bash dont understand that. Pundits like her are paid a few million dollars a year so they can live in elitist societies where people speak politically correct newspeak. No one can accuse Nugent of being politically correct. That is another reason people like him. Now, could he have used better words? Probably. CNN's Wolf Blitzer was the one, though,  who tied the phrase into something our of Nazi Germany which is most likely something Nugent didnt think of all. Come on, media elite, get with the program. If you still think you need to be angry at Ted Nugent for being Ted Nugent I think Nugent  will take you on. But now going through all the Republicans to tie them to Nugent is a witch hunt. And this witch hunt was born at CNN and with Wolf Blitzer.  Nugent is nobody's surrogate
​Dec 23, 2013: Newsmax: CNN's Dana Bash to Rep. Eric Cantor: Happy Holidays!
A testy, but friendly, bit of jousting between CNN's Dana Bash and Rep. Eric Cantor, R-Va., ended with jovial (perhaps) holiday greetings Monday.
​Oct 20, 2013: Right Scoop: FULL INTERVIEW: Ted Cruz tells CNN’s Dana Bash he isn’t giving up fight to stop Obamacare…
According to Dana Bash, Ted Cruz was greeted by Republican women in Texas like a rock star the other night just before she sad down with Cruz for this interview.

Apr 20, 2013: New York Magazine:  CNN Isn’t ‘Reintroducing’ Candy Crowley, John King, Dana Bash
CNN ran a full-page ad in the New York Times on Monday, featuring mugshots of its marquee talent and the tagline, "Allow Us to Reintroduce Ourselves." But Deadline's Dominic Patten noticed not all were accounted for. "There’s no Candy Crowley, no John King and no lead congressional correspondent Dana Bash." Patten suggested those left off might be on the way out, which seems like overkill, but after Crowley's misstep in the Steubenville coverage, it's not too surprising that they'd want to lower her profileCNN stalwarts John King and Dana Bash are reportedly separating after less than four years of marriage.

The pair, who had their only child last June, have been living in separate homes for months, a source told the Washington Post.

There are no indications as to what led to the split, only that the process has been 'very difficult' and 'one that neither party wanted'. for a 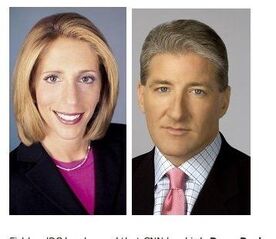 ​​Daily Mail: CNN anchors John King and Dana Bash split after less than four years of marriage
​CNN stalwarts John King and Dana Bash are reportedly separating after less than four years of marriage.
The pair, who had their only child last June, have been living in separate homes for months, a source told the Washington Post.
There are no indications as to what led to the split, only that the process has been 'very difficult' and 'one that neither party wanted'. 03.21.22
​Dana Bash (born Dana Ruth Schwartz; June 15, 1971) is an American journalist and anchorwoman for CNN who currently covers the Capitol Hill beat alongside John King and Jessica Yellin. Previous to this assignment, she was a White House correspondent for the network. After completing her undergraduate political communications B.A. degree at The George Washington University in Washington, D.C., she joined CNN as Dana Schwartz. Before becoming an on-air reporter, she was a producer for CNN on Capitol Hill, specializing in coverage of the U.S. Senate. Previous to that assignment, she produced for CNN's weekend programs, Late Edition, Evans & Novak and Inside Politics. In early 2012, Bash was involved in a number of controversies concerning Ron Paul.