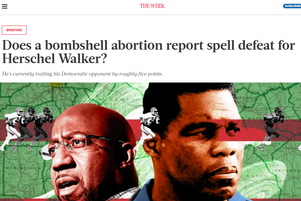 The Week: ​Does a bombshell abortion report spell defeat for Herschel Walker?
Erick Erickson, a conservative radio host based in Georgia, said he believes "Walker has a really good chance to win," but that's without considering the effects of an attack ad in which Walker's ex-wife discusses his spousal abuse. The ad is "impacting Christian women who might otherwise hold their nose and vote Walker," Erickson tweeted. "I know a lot of these women. They keep talking about that ad, and Walker's team has not mounted an effective response, probably because they don't have the money to do so. Add in this abortion stuff and this is about keeping those women out of that race, which could work."
Erickson elaborated further during an interview with Axios, saying that while it's easy for Republicans to "dismiss the Daily Beast as a liberal publication," it's harder to ignore the tweets from Christian Walker — especially given the influencer's otherwise vocal support of Trump and the GOP. "That was what sent Republicans into a frenzy," Erickson said.  10.6.22
Capstone Report: ​‘Christian’ Erick Erickson calls Soledad O’Brien a ‘bitch’
​In a tweet exchange O’Brien called Erickson “clueless and a bigot.” Erickson responded in something questionable for a Christian gentleman; Erickson said of O’Brien, “Dumb and a bitch.  Interesting combination. Also, why she can’t keep a job on TV.” 9.15.22
Sept 3, 2021: Vanity Fair: ​Anti-Vax Radio Hosts Keep Dying From COVID
Elsewhere in the conservative-radio world, Erick Erickson, who hosts a nationally syndicated talk show out of Atlanta, condemned the National Religious Broadcasters for firing its spokesperson, Daniel Darling, after he appeared on MSNBC to advocate for evangelicals to get vaccinated. “For [the National Religious Broadcasters] to fire Dan for reasonable advocacy of vaccinations is a pretty damning indictment on the organization,” Erickson wrote in an August tweet.
The reality is that there is nothing permanent in American politics, and that shapes my thinking and my opinions. The left will institutionally be as unable to permanently reshape the American landscape as the right has been unable to do. When Trump leaves office in January of next year or in 2025, the left will rapidly undo what Trump has done by executive fiat, just as Trump undid much from the Obama era. Then a future Republican will undo that. Rinse. Wash. Repeat.  --Erick Erickson 8.23.20