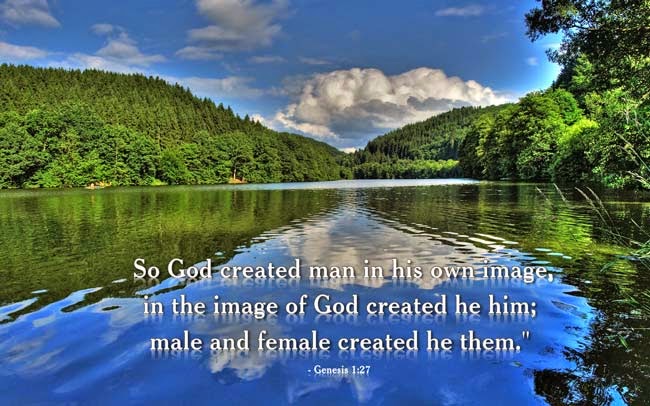 Gen 1:26: And God said, Let us make man in our image, after our likeness: and let them have dominion over the fish of the sea, and over the fowl of the air, and over the cattle, and over all the earth, and over every creeping thing that creepeth upon the earth.
In the opening paragraph of the Declaration of Independence, Thomas Jefferson said that “the Laws of Nature and of Nature’s God” entitled the nations of the earth to a “separate and equal station.”
In the context of history, this was a striking statement. Jefferson was arguing – on behalf of the American colonies – that people had a right to govern themselves because God had purposed that it be so. Nature itself demonstrated this in ways that were so clear that they could be understood as laws.
In the second paragraph of the Declaration is undoubtedly one of the most famous phrases in modern history:
“We hold these truths to be self-evident, that all men are created equal, that they are endowed by their Creator with certain unalienable Rights, that among these are Life, Liberty and the pursuit of Happiness.”
The statement is breathtaking in its implications. Jefferson acknowledges the existence of a God who created us and with that life-giving act also made it clear that we are equal before Him. In turn, that equality meant that we all had certain rights that could not lawfully – that is, in the eyes of our Creator – be abridged by governments.
When Jefferson stated that such truths were “self-evident,” he is referencing natural law. The reality was objectively true – just as much as the laws of science. Human beings, empowered with reason, were expected to see and understand the breadth of blessings bestowed upon mankind --Ed Vitagliano (AFA) 09.01.16
​
Moses writes that man is created in God's "image" and "likeness." Any reliable lexicon mentions that "image" and "likeness" reinforce each other in a manner common to Hebrew. It means we are like God in form and implies that, like Him, we have a spiritual capacity which animals do not have. This verse uses the plural pronouns "Us" and "Our" to refer to their antecedent elohim. Two divine personalities were working as one. They were equal in that both were God but not equal in authority, even as husband, wife, and child are equal in their humanity but not equal in authority. Jesus said it Himself: "My Father is greater than I" (John 14:28). Genesis 2 contains a parallel account of creation, adding detail to certain parts of the narrative of the first chapter. Notice God's expanded instruction: "Then the LORD God took the man and put him in the garden of Eden to tend [dress, KJV] and keep it" (verse 15). This greatly modifies the force of "have dominion" and "subdue it" from Genesis 1:26, 28!
Tend (Hebrew 'abad) means "to work or serve," and thus referring to the ground or a garden, it can be defined as "to till or cultivate." It possesses the nuance seen in the KJV's choice in its translation: "dress," implying adornment, embellishment, and improvement.

Keep (Hebrew shamar) means "to exercise great care over." In the context of Genesis 2:15, it expresses God's wish that mankind, in the person of Adam, "take care of," "guard," or "watch over" the garden. A caretaker maintains and protects his charge so that he can return it to its owner in as good or better condition than when he received it.
​
Genesis 1:26–28 indicates that God made man—unlike the rest of creation—in his own image. This passage also demonstrates that God’s purpose for humanity was an embodied existence. Genesis 2:7 highlights this point as well. God makes man out of the dust and then breathes into him the breath of life. This indicates that we were a body before we were a person. The body, as it turns out, is not incidental to our personhood. Adam and Eve are given the commission to multiply and subdue the earth. Their bodies allow them, by God’s creation and his sovereign plan, to fulfill that task of image-bearing.  --Albert Mohler