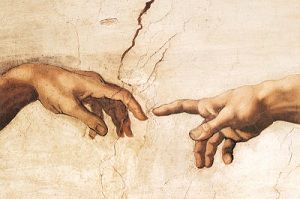 When God said, "Let us make man in our image", we are swept back into the trinity before the creation of the world. Here is thought, because God is a personal God, who thinks, who acts, and who feels in his love. The balances here are most delicate and we must hold both sides or we lose the wealth of the Christian position. There is an external world; it is not the extension of God's essence. But while there is a true external world which is not the extension of God's essence, God thought first. These realities were in the thought of God before they were brought forth by his power, his creative fiat as the objective and external world. On the ceiling of the Sistine chapel in Rome there are the tremendous frescoes by Michelangelo. Among them is that magnificent picture of the creation of man. God is reaching out his finger and man, having just been created, reaches to him as well. But their fingers do not touch. This is true Christian insight. Man is not an extension of God, cut off like a reproducing amoeba. God created man external to himself, and they must not touch in the picture. However, this point must be made: That which is created out of nothing and now has objective reality, does show forth the thought of God and is therefore an exhibition of who and what he is. The external world is not an extension of the essence of God,; nevertheless, the external world does reveal and exhibit who and what God is. Image, in it's truest meaning, is the essence of what really is. Man is the likeness of one subject (God)--expressed visibly through another (man). This does not mean physical characteristics--for God is invisible spirit. But this image is unique to man. Only after God created the plant life, animal life, and such, and declares, them all "good," does He create man. Only humanity received the image of God, which separates man from animals and gives him dignity. Consequently--the unbeliever perceives man as equal to animals because he lacks understanding of his special dignity as a human being. On the other hand, on the other extreme, the unbeliever can perceive God as being equal..which is an unfounded liberal perspective of "image."

That man was made last of all the creatures, that it might not be suspected that he had been, any way, a helper to God in the creation of the world: that question must be for ever humbling and mortifying to him, Where wast thou, or any of thy kind, when I laid the foundations of the earth? Job 38:4. Yet it was both an honour and a favour to him that he was made last: an honour, for the method of the creation was to advance from that which was less perfect to that which was more so; and a favour, for it was not fit he should be lodged in the palace designed for him till it was completely fitted up and furnished for his reception. Man, as soon as he was made, had the whole visible creation before him, both to contemplate and to take the comfort of. Man was made the same day that the beasts were, because his body was made of the same earth with theirs; and, while he is in the body, he inhabits the same earth with them. God forbid that by indulging the body and the desires of it we should make ourselves like the beasts that perish
"male and female He created them." Because of the systematic working of error in our culture, we have to talk about things we thought we would never have to bring up. I had no idea in my earlier years I would be addressing this peculiarity of our culture: the blending and blurring of gender differences! That distinction God built into nature is today denied, re-defined and perverted, to accommodate the culture (and ultimately, the perverse desires of individuals serving their own lusts). This is where we are in the culture of 2002.

Sometimes we become aware of men who want to be women, and women who want to be men! There is such a powerful movement, rushing and running away from traditional "gender stereotypes" and roles. According to some who are given their voice by the media, it is no longer good to let the little girls play with dolls and let the little boys have trucks and learn to throw a ball. There is an agenda (subtle in some cases, but bold in others), and the purpose is to deny, confuse and blend the sexes.

Before the Bible is ever opened, the uniqueness of male and female is evidenced in nature. Men and women are different, and that is objectively discernable. Once you get away from the "softer sciences," the evidence joins Biblical truth to confirm the obvious. There are differences in metabolism rate; in skeletal structure; in the circulatory system and certainly in the reproductive system. Forensic scientists can detect the differences between male and female years after the body and spirit have parted! In addition to biological differences, there are social, emotional and psychological differences - about which there was no debate, before the current gender neutral movement (sometimes called "unisex."). {For an excellent study of these issues, see Florida College Annual Lectures, 1995 - In His Image: Male and Female In Nature, by Wayne T. Galloway, p.#151}.

Biblically, here is the case: "And God created man in His own image, in the image of God He crated him; male and female He created them." God created man, in His own image, and the distinction is God's: male and female. Sexual differentiation was not a result of social evolution; it was explicit in divine creation. The suitable partner for man was a woman (Gen. 2:18)!

Romans chapter one is describing the behaviors of a people who have forsaken God. This has always been the context of Romans 1 (long before current discussions that confuse the genders).

"For this reason God gave them up to vile passions. For even their women exchanged the natural use for what is against nature. Likewise also the men, leaving the natural use of the woman, burned in their lust for one another, men with men committing what is shameful, and receiving in themselves the penalty of their error which was due." (Rom. 1:26,27).

Paul uses the terms "natural" and "unnatural," reflecting what is explicitly written in Genesis 1:27 - male and female. When men or women choose to ignore the gender distinction God ordained, they go against God, against nature, corrupt themselves, produce victims, contribute to the decay of their society and work against the purposes of Almighty God. And every work against the purposes of God will be defeated.

"We ought not fear the differences between men and women, rather we should fear a loss of that distinction. Does not nature itself teach us that men and women are different? And in agreement with these natural differences and building on them, the Scriptures clearly teach the proper role for men and women. These innate differences and these traditional gender roles have been so fundamental to mankind's progress and happiness that we may have taken for granted their importance. But if we lose these distinctions it will be painfully clear how important they are." (Thaxter Dickey, "Male and Female Created He Them" in the book, "A Tribute To Melvin Curry," p.#87).