March 1, 2022:  Abbott won the primary with over 66% of the vote. He was challenged by the Democratic nominee, former U.S. Representative Beto O'Rourke. Abbott defeated O'Rourke, 54% to 43%, becoming the fifth Texas governor to serve three terms.

April 7, 2022: Abbott announced in a press conference a plan to direct the Texas Division of Emergency Management to bus illegal immigrants with 900 charter buses from Texas to Washington D.C, citing the potential surge of immigrants who would cross the border after Title 42 provisions regarding communicable disease were set to be rolled back by President Biden the next month

May 24, 2022: Abbott said that an 18-year-old carrying a handgun and possibly a rifle (later identified as an Daniel Defense DDM4, an AR-15-style semi-automatic rifle) killed 19 students and 2 teachers at the Robb Elementary School in Uvalde

May 25, 2022:  Abbott held a news conference to give further information on the Uvalde shooting. Gun laws were not mentioned. Abbott said that mental health in the community was the root cause of the event.

May 27, 2022: Abbott published a YouTube message. He did not mention the sale of assault rifles, but said that gun laws have not been effective, noting that the shooter broke two gun laws the day he committed the multiple murders. It is a felony to possess a gun on school property, and "what he did on campus is capital murder. That's a crime that would have subjected him to the death penalty in Texas", Abbott said

September 15, 2022: Abbott sent two buses with 101 mostly Venezuelan migrants detained after crossing the U.S. border with Mexico to the residence of Vice President Kamala Harris, at the Naval Observatory in Washington, D. C.

September 17, 2022:  Abbott sent another bus with 50 migrants to the residence of Vice President Kamala Harris, at the Naval Observatory in Washington, D. C.

Dec 14, 2022: Abbott asked his top law enforcement official to investigate nongovernmental organizations (NGOs) operating in the state over their role in assisting immigrants to cross the U.S.-Mexico border. In a letter to Attorney General Ken Paxton (R), Abbott said the number of “illegal immigrants crossing the Texas-Mexico border has reached an all-time high. Indeed, this past Sunday, over a 24-hour span, over 2,600 illegal immigrants crossed the border near El Paso and illegally entered Texas”

December 16, 2022:
​After the 2018, Santa Fe High School shooting, Texas Governor Greg Abbott said that he would consult across Texas in an attempt to prevent gun violence in schools. He had a series of round-table discussions followed at the state capitol. In a speech to a NRA convention in Dallas almost two weeks later, Abbott said, "The problem is not guns, it’s hearts without God".
So, if that is the problem..what is the answer? It would be making efforts to turn hearts toward God, would it not? Or is it blaming the Christian church for not reaching those hearts? And how does an elected official deal with that when separation of church and state is a paramount issue throughout America's history?
A few days later Abbott published a Youtube video saying the shooter broke "two gun laws the day he committed the multiple murders"..... It is a felony to possess a gun on school property" and "what he did on campus is capital murder. That's a crime that would have subjected him to the death penalty in Texas." So, if that is the answer..what is the problem? Are shooters concerned about committing a crime? Obviously not. The State of Texas has executed 578 people since 1982. Seems to me that if you combine both responses from Governor Abbott that the shootings resulted because they had a godless heart and ignorance of capital penalties.
Before God reaches hearts, men are subject only to or restrained by secular rules and laws of society. Don't kill people with guns. Governments can only really control the penalty phase of any legal breach of justice...though lawyers can often breach that and do quite often.
Reaching hearts is actually the most sure way. But you can't make reaching hearts a law with consequences no matter how hard you try to legislate it.  And since the second amendment is applied in the way it is today which gives any gun enthusiast an orgasm there aren't much options...or maybe none at all -Z
Dec 25, 2022: White House spokesperson Abdullah Hasan said in a statement:  “Governor Abbott abandoned children on the side of the road in below freezing temperatures on Christmas Eve without coordinating with any Federal or local authorities. As we have repeatedly said, we are willing to work with anyone – Republican or Democrat alike – on real solutions, like the comprehensive immigration reform and border security measures President Biden sent to Congress on his first day in office, but these political games accomplish nothing and only put lives in danger." 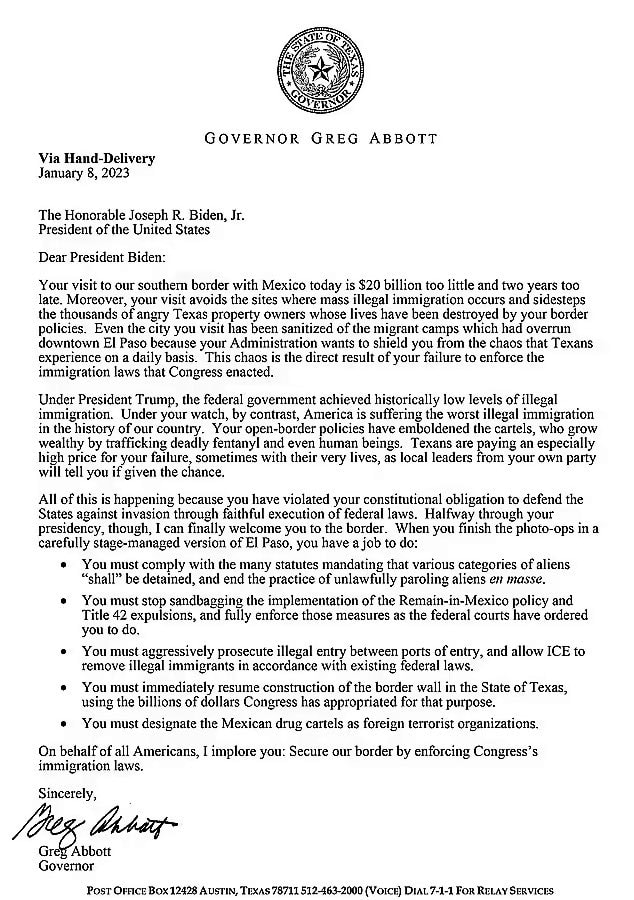