Sept 20, 2021: Breitbart: Pence, Haley, Pompeo Rank as Top Christian Allies to Israel in the World
Former Vice President Mike Pence topped the second annual list of Israel’s Top 50 Christian Allies, released Tuesday by the Israel Allies Foundation in honor of the Jewish Sukkot holiday.
Coming in at number two is Pastor John Hagee, the founder and chairman of Christians United for Israel (CUFI). Spots three and four are filled respectively by Pastor Larry Huch of the Texas-based New Beginnings mega-church and former Canadian prime minister, Stephen Harper.
Aug 21, 2015: Charisma: JOHN HAGEE: 'The Antichrist is Here'
"All of this chaos is leading to a global dictator. Europe is going to call him the economic czar. The press will call him the 'new Caesar.' The Bible calls him the Antichrist." – John Hagee

My healthcare plan is pretty simple. I'm covered as long as I stay healthy.

Oct 9, 2014: ReKnew: Is God Trying to Tell Us Something Through Blood Moons?
This week we experienced the second of a series of four “blood moons.” If you’ve read John Hagee’s book Four Blood Moons: Something Is About To Change, you might be inclined to believe that God is sending us a message through these heavenly events. Greg begs to differ
Aug 18, 2014: Jewish Journal: Interview with Pastor John Hagee, founder of ‘Christians United for Israel’
Last month Christians United for Israel (CUFI) – the largest pro-Israel organization in America with nearly 1.8 million members (and 1.2 million Facebook followers – 15 times as many as AIPAC) – held its ninth annual Washington Summit, with 4,800 delegates from all 50 states
May 26, 2014: Postmillenialism: HAGEE DENIES JESUS’ MESSIAHSHIP
I am continuing in a rebuttal of the teachings of John Hagee on Israel. His best-selling status in evangelical culture is a sign of serious problems in the church, and an explanation of why postmillennialism has difficulty getting traction today. In this article I will demonstrate Hagee’s errors regarding Christ as the Messiah.
May 22, 2014: Rosh Pina Project: John Hagee Claims Jesus Did Not Come to be Messiah
Surprising and not a little shocking to hear this from any Christian minister. It is especially odd from Hagee, considering everyone thinks Christian Zionists like him are really missionaries in disguise.
May 8, 2014: Irregular Times: Pastor John Hagee: Something Big is Coming with the Four Blood Moons. What is it?
Like the Rev. Irwin Baxter, Pastor John Hagee just can’t stay away from the Christian End Times.
May 6, 2014: Skeptical Inquests: Astronomy and Christian Superstition: A Review of John Hagee’s “Four Blood Moons”
John Hagee, founder and senior pastor of Cornerstone Church in San Antonio, Texas, wrote a whole book about the coming tetrad of blood moons and their imagined connections to biblical prophecy.
Apr 29, 2014: Youtube: John Hagee. 'Prevent Obama from sacrificing Israel for Palestine.
Beschrijving - John Hagee, april 2014. Prevent Obama from sacrificing God's holy Israel for Palestina.
Apr 18, 2014: American Vision: Why John Hagee is certainly wrong about “blood moons”
John Hagee’s Harold Camping moment has arrived, and whether or not his followers will abandon him as most did that previous false prophet, Hagee is certainly just as wrong about Bible prophecy. 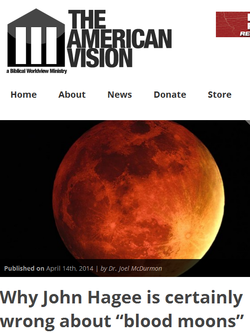 ON THE RECORD: Apr 14, 2014:  Joel McDurmon wrote an expose recently about John Hagee's "blood moon prophecies," ("Why John Hagee is certainly wrong about “blood moons"). McDurmon makes his position clear as he began:
"John Hagee’s Harold Camping moment has arrived, and whether or not his followers will abandon him as most did that previous false prophet, Hagee is certainly just as wrong about Bible prophecy.."
For those of you who do not know, the late  Harold Camping is likely the 21st century poster child for false prophets.
McDurmon makes it clear that Hagee is doing nothing more than the typical "slight of hand,"  or in this case "slight of mouth," commentaries:
"In mainstream news outlets, however, Hagee has kept his predictions much more general. In an older interview with Fox, and now when contacted by New York Daily News, Hagee only predicts “something big is about to happen.” This is, of course, the kind of prediction that cannot fail to be proven true. If anything big happens between now and the feast of tabernacles 2015, Hagee can point to it as proof he was right."
Read More Here: Blood Moons and Bad Prophecies
Apr 14, 2014: Breitbart Unmasked: Pastor John Hagee Predicts ‘Blood Moon’ Eclipses Will Shake The World
Megachurch pastor John Hagee has prophesied that a “world shaking” event will take place some time during a sequence of four lunar eclipses between tomorrow and October 2015.
Dec 28, 2013: MySA: Pastor John Hagee to atheists: Get out of U.S.
A San Antonio pastor has a message to atheists and people who don't celebrate Christmas: “Leave the country” or “Take your Walkman and stuff it into your ears.”
Dec 18, 2013: American Vision: Camping is dead. Long live John Hagee!
John Hagee’s Harold Camping moment has arrived, and whether or not his followers will abandon him as most did that previous false prophet, Hagee is certainly just as wrong about Bible prophecy.
Mar 12, 2008: American Propsect: John Hagee's Controversial Gospel
An excerpt from Sarah Posner's new book, God's Profits: Faith, Fraud, and the Republican Crusade for Values Voters.
Feb 26, 2008: Right Wing Watch: Catholic League Blasts McCain Over Hagee
It is really quite remarkable when someone like Bill Donohue is blasting John McCain for cozying up to a "bigot" like John Hagee: "There are plenty of staunch evangelical leaders who are pro-Israel, but are not anti-Catholic. John Hagee is not one of them. Indeed, for the past few decades, he has waged an unrelenting war against the Catholic Church.
Dec 11, 2007: Files From Toni: John Hagee Refuted By Dr. Michael L. Brown
Dr. Michael Brown has completed a superior refutation, posted here below in its entirety,concerning the false and erroneous teachings of John Hagee, who in October in his Defense of Israel Book, stated that Jesus did not come to earth to be the Messiah, and that the Jews cannot be blamed for not accepting what was never offered.
John Charles Hagee (born April 12, 1940) is an American founder and senior pastor of Cornerstone Church in San Antonio, Texas, a non-denominational Charismatic megachurch with more than 20,000 active members. Hagee is also the chief executive officer (CEO) of his non-profit corporation, Global Evangelism Television (GETV). Hagee is the President and CEO of John Hagee Ministries, which telecasts his national radio and television ministry carried in the United States on ten television networks, including 62 high-power stations aired to more than 150 million households. He is shown on networks around the globe, including The Inspiration Network (INSP), Trinity Broadcasting Network (TBN), and Inspiration Now TV. John Hagee Ministries is in Canada on the Miracle Channel and CTS and can be seen in places including Africa, Europe, Australia and New Zealand. Hagee is the founder and National Chairman of the Christian-Zionist organization Christians United for Israel, incorporated on February 7, 2006.

Hagee's support for Israel has brought him death threats. He has also incurred controversy for his comments based on religious beliefs regarding Islam, Catholicism, and homosexuality.