Jan 4, 2022: Christian Headlines: ​MacArthur Urges Pastors to Preach on Sexual Morality on January 16 to Protest Conversion Therapy Bans
Pastor and author John MacArthur is urging pastors in the United States and Canada to preach a sermon on January 16 on the “biblical view of sexual morality” to protest a new Canadian law that bans conversion therapy.
Dec 30,  2021: Christian Post: ​John MacArthur urges pastors to preach on sexual morality to protest conversion therapy ban
Pastor and theologian John MacArthur of Grace Community Church in Los Angeles is calling on pastors to preach about the “biblical view of sexual morality” on Jan. 16 in opposition to a Canadian law banning therapy for unwanted sexual attractions and gender confusion — what is often derisively referred to as conversion therapy — set to take effect next month. ​

Sept 7, 2021:
​John MacArthur believed he was right about his fight against "religious liberty" because he won the case in court. MacArthur believed tyranny was being committed against him because he had a right to ignore any government mandate concerning the pandemic because God was on his side. He won an $800,00 settlement in court. ​Leading the fight was the Thomas More Society and lawyers Jenna Ellis and Charles LiMandri. These lawyers won an $800,000 settlement from the State of California and the County of Los Angeles. It's interesting that he does not apply that same "logic" on other issues, like Roe V Wade, and all the times that losses were made in court that it wasnt considered a victory.. MacArthur is one of several mainstream pastors who are very much entrenched in Christian Nationalism.
July 26, 2021: ​The Gate Keepers: Brent Detwiler Exposes the Many Scandals of Pastor John MacArthur
​Pastor John MacArthur has built up quite a large following over the decades of doing ministry. Being the pastor of Grace Community Church, the face of Grace To You and President of The Masters Seminary, Pastor MacArthur has built up quite the reputation as a theological and expositor of God’s Word. Brent Detwiler, however, has seen quite another side of him and his ministry that has been riddled with scandals and corruption, which is what we discuss during this episode of Conversations with Jeff.
June 23, 2021: Religious Dispatches: WHERE DID WHITE EVANGELICALISM’S HATRED OF CRITICAL RACE THEORY REALLY BEGIN?
But it was John MacArthur’s repudiation of social justice in the infamous Statement on Social Justice and the Gospel (Dallas Statement) opened the floodgates for critiques on CRT. In Article 1 it reads:
We deny that Christian belief, character, or conduct can be dictated by any other authority, and we deny that the postmodern ideologies derived from intersectionality, radical feminism, and critical race theory are consistent with biblical teaching. We further deny that competency to teach on any biblical issue comes from any qualification for spiritual people other than clear understanding and simple communication of what is revealed in scripture.
Sept 11, 2020: Christian Headlines: California Judge Bans John MacArthur, Church from Worshiping Indoors​
​A California judge on Thursday issued an injunction prohibiting John MacArthur and Grace Community Church from meeting indoors for worship services during the pandemic, thus handing Los Angeles County the ruling it has sought for several weeks.

Sepy 2, 2020:
​👉California pastor and author John MacArthur has been steadily going off the deep end for awhile now..MacArthur has referred to Catholicism as the "Kingdom of Satan, attacking Steven Furtick and Beth Moore. .But if you read his theology about 10 years ago you could see the beginning. In a nutshell, it's a desire for power which is primary motivation over proclaiming Jesus as Lord to a state that could use the message.,

August 23, 2020: Friendly Athiest: Anti-Muslim Megachurch Preacher: Real Christians Hate Abortion and LGBTQ People
Pastor John MacArthur of Grace Community Church in California is best known as the Christian so deranged that he wants his entire congregation to catch COVID. Last week, during an in-person service in defiance of government orders, he told his congregation how proud he was that “you’re not distancing, and you’re not wearing masks.”
Aug 15, 2020: Religious News Service: Judge orders John MacArthur, Grace Community Church to wear masks, social distance during services
​Megachurch pastor John MacArthur and his congregation can continue to meeting indoors for worship, a California judge ruled Friday. (August 14).
But they must wear face coverings and practice social distancing, according to a California Superior Court judge's order.
Los Angeles County health officials had sought temporary restraining order barring the church from violating health orders that ban large indoor meetings and singing during meetings.
Dec 31, 2019: Christian Headlines: 9. JOHN MACARTHUR TELLS BETH MOORE TO ‘GO HOME’
Pastor Brandon Cox also commented on the situation writing, “The host says, ‘Beth Moore.’ And a man who is supposed to be a model of biblical manhood and spiritual leadership responds, ‘Go home!’ And a room full of men laugh. This is sad. It's unbiblical. But it's the fruit of arrogance.”

A conspiracy theorist walks into a bar...
Or is that just what *they* want you to think?😳

Aug 21, 2015: Charisma: Self-Proclaimed 'Prophet' Stands on John MacArthur's Stage and Rebukes Him
A man claiming to be a prophet disrupted John MacArthur's sermon recently.
Apr 20, 2015: Youtube: ISIS Waging War on Christians, Fox Business - John MacArthur
Mar 9, 2015: Narrowing Path: Video Link: John McArthur’s outstanding defense of the Holy Scriptures at the recent ‘Inerrancy Summit’
This opening address at the recent Inerrancy Summit is well worth your time… please share it with other Christians if you can. I am not endorsing all of John McArthur’s teaching by posting this video, but this really is excellent!
Mar 4, 2015: Youtube: Shepherds' Conference 2015 | The Inerrancy Summit | General Session 1 - John MacArthur
Sept 7, 2014: What is Truth?: Attacking the "Fundamentalists": Bravo to John MacArthur and David Cloud, Bombarded by C. J. Mahaney and Fred Butler
When an evangelical wants to take a shot at someone, he will call him a "fundamentalist."  That's supposed to be an ultimate insult.  I read it coming from two men aimed at two preachers in the last three or four days for the same reason.  In one, I read C. J. Mahaney affronting John MacArthur in a post by Brent Detwiler, and in the other Fred Butler assaulting David Cloud.  These two are very, very similar, and they both illustrate how "fundamentalist" is used as an invective by evangelicals, to discourage men from standing against certain corruption.  I read what Mahaney and Butler did, to be identical to each other.  They are dealing with similar situations and using "fundamentalist" as a means to discourage it.
May 23, 2014: Reformed Bibliophile: John MacArthur on the Homosexual Agenda
One of the supreme tragedies in our day is reclassification of homosexuality as a non-sin, as a normal behavior, as an acceptable behavior, even as a noble behavior because that’s the way you’re made, instead of defining it the way the Bible defines it as a perversion from which you need to be rescued.
"Brown addresses MacArthur’s claim to guilt by association (the idea that if one is part of a movement that has involved scandal then one is guilty by association), and rightly points out that the pendulum can swing both ways, observing Luther’s anti-Semitism and Calvin’s draconian rules that led to men and women being burnt at the stake. Both Luther and Calvin are darlings of the theological world that John MacArthur walks in, and so Brown fairly asks if we should also associate MacArthur with such doctrinal errors." (May 14, 2014: Pneuma Review: "Michael Brown’s Authentic Fire, reviewed by Daniel Snape" )
Authentic Fire is Dr. Michael Brown’s response to John MacArthur’s book Strange Fire. MacArthur’s Strange Fire launches a scathing attack on the Christian Charismatic Movement and so it comes as no surprise that champions of the charismatic community should launch a defense to MacArthur’s assertions.
"One of the most troubling aspects of Heaven Is for Real is the way Todd Burpo constantly insinuates that personal experiences—even the spectral memories of a three-year-old boy under anesthetics—are somehow more compelling than Scripture alone. “I had been a Chris­tian since childhood and a pastor for half my life, so I believed that before. But now I knew it” (p. 84). Colton’s experiential exegesis of heaven has clearly made a far more profound impact on Todd (and has been more formative to his notion of the afterlife) than anything he had previously gleaned about heaven from his own study of Scripture....
....That way of thinking is diametrically opposed to what the Bible says about faith, experience, and the authority of Scripture. In fact, the most important defense Christians have against self-deception is a conviction that the written Word of God is more certain and more authoritative than anyone’s experience. Scripture teaches this explicitly and repeatedly."  --John MacArthur ("The Idolatry of Experience") 05.02.14
Apr 22, 2014: ABC News: ‘Heaven Is for Real’ Ignites Debate About What Awaits Us
“I’m convinced that the entire book and movie is a hoax from start to finish,” said John MacArthur, the pastor of Grace Community Church in Sun Valley, Calif.  “It has nothing to do with Christianity.  It has nothing to do with the Bible.”
Mar 21, 2014: Here I Blog: John MacArthur on Duck Dynasty and Theology
I have written on Duck Dynasty and baptism a few times on this blog (see below).
Oct 23, 2013: Charisma: To My Fundamentalist Brother John MacArthur: Grace to You Too
Fundamentalist pastor John MacArthur is a gifted preacher, author and lover of Scripture. His Grace to You radio program points countless people to the Bible, and his Master's Seminary trains hundreds of ministry leaders. He’s a staunch Calvinist, but that doesn’t make him any less my brother in Christ.
Nov 1, 2010: Youtube: John MacArthur Rebukes Joel Osteen
Pastor John MacArthur exposes Joel Osteen as a pagan religionist, a quasi-pantheist, and an agent of Satan. He critiques Joel's book, quotes, and prayer and compares them with what the Bible teaches. 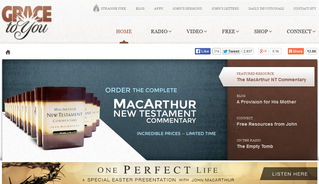 John Fullerton MacArthur, Jr. (born June 19, 1939) is an American Calvinist, Baptist pastor and author known for his internationally-syndicated radio program Grace to You. A popular author and conference speaker, he has served as the pastor-teacher of Grace Community Church in Sun Valley, California since February 9, 1969 and also currently serves as the president of The Master's College in Newhall, California and The Master's Seminary in Sun Valley, California. Theologically, MacArthur is considered a Calvinist, and a strong proponent of expository preaching. He has been acknowledged by Christianity Today as one of the most influential preachers of his time, and was a frequent guest on Larry King Live as a representative of an evangelical Christian perspective