​January 1, 2013:
Gas-stoveghazi is a another right wing issue for them to manufacture rage about. No one is out to take anyones gas stoves. Same with Hillarys email-ghazi and Hunter Bidens Laptop-ghazi....not to forget the original Benghazi-ghazi. There's no there there on any of these right-wing rage points. The only intellectual way to pursue it is to not pursue it.
But we now have a benchmark rule: If Boebert, Gaetz, MJ Greene, Tuckkker Carlson or Ted Cruz are on the rage manufacturing trail...then you know whatever the issue it is more than likely not a real issue.
Jan 14, 2023: ​PrescottENews: Opinion: How Chip Roy won the speaker fight – Rich Lowry
​For many, including me, the seriousness of purpose behind the Republican revolt against McCarthy was obscured by the inability of many of the dissidents to articulate an endgame or come up with an alternative candidate for speaker. The prominent role of the likes of Matt Gaetz and Lauren Boebert, who enjoy pyrotechnics for the sake of them, was also inevitably discrediting.
Jan 9, 2023: Bipartisan Report: ​Lauren Boebert Turns Against ‘Unhinged’ Marjorie Greene
In recent comments to the Associated Press, Rep. Lauren Boebert (R-Colo.) was dismissive of what she characterized as “unhinged” public behavior from Rep. Marjorie Taylor Greene (R-Ga.), marking yet another rift on the far-right of the GOP as they stagger into what looks like it’ll be a chaotic two years in the House majority.
Dec 21, 2022: The Times of Israel: ​Boebert needles fellow GOP member Marjorie Taylor Greene over ‘Jewish space lasers
​Amid disagreement over next US House speaker, Colorado representative brings up Georgia colleague’s past Facebook post implying Rothschild-owned firm started fire from space
Dec 20, 2022: MSNBC: ​Why Marjorie Taylor Greene and Lauren Boebert are fighting
Reps. Marjorie Taylor Greene, R-Ga., and Lauren Boebert, R-Colo., used to be pals. They joined Congress together as representatives of the MAGA faction of the GOP in 2020, shared a passion for bigoted publicity stunts, and happily heckled Joe Biden together at the State of the Union. But their friendship appears to be crumbling.
Dec 20, 2022: Fox News: ​Lauren Boebert, Marjorie Taylor Greene snipe at each other over McCarthy speaker support
​Rep. Lauren Boebert, R-Colo., has hit back at fellow firebrand Rep. Marjorie Taylor Greene, R-Ga., in a public spat over who House Republicans should support to be the next speaker of the House.
The two lawmakers, both Trump Republicans, are on different sides when it comes to House Minority Leader Kevin McCarthy, R-Calif., and his ambition to be the next speaker. Greene, a McCarthy ally, criticized Boebert Monday after the Colorado lawmaker was asked why she didn't join Greene in support of McCarthy at a Turning Point USA conference in Phoenix.
Dec 19, 2022: ​The Hill: Boebert says she won’t support McCarthy without mechanism to remove Speaker
Rep. Lauren Boebert (R-Colo.) on Monday said she would not support House Minority Leader Kevin McCarthy (R-Calif.) as the next Speaker unless there is a mechanism to easily remove him from the top post.
Dec 12, 2022: KKTV : ​Lauren Boebert officially wins U.S. Congressional District 3 in Colorado after recount​The Colorado secretary of state certified the 2022 general election on Monday.
“The certification was conducted after each county’s bipartisan canvass boards submitted their official abstract of votes to the Secretary of State’s Office, as well as the conclusion of a mandatory recount in the race for Colorado’s U.S. Congressional District 3 and permissive recount of the Colorado House District 43 race,” part of a news release from the Secretary of State’s Office reads. 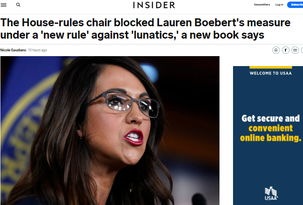 Business Insider: ​The House-rules chair blocked Lauren Boebert's measure under a 'new rule' against 'lunatics,' a new book says
​House Rules Committee Chair Jim McGovern created a "new rule" on his committee for people like Rep. Lauren Boebert, the gun-toting far-right firebrand from Colorado, a new book says.
When one of her "flurry of nonsensical amendments turned out to be reasonable," McGovern, a Massachusetts Democrat, blocked it from going to the House floor, and a Republican committee member wanted to know why, the journalist Robert Draper writes in his new book, "Weapons of Mass Delusion: When the Republican Party Lost Its Mind."
10.18.22 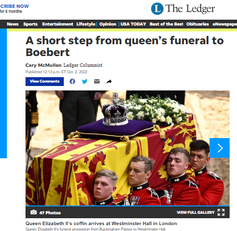 The Ledger: ​A short step from queen’s funeral to Boebert
I imagine that a good many Americans watched the pomp of the queen’s state funeral with some envy that we don’t have anything like it. But as Americans we shouldn’t be envious for constitutional reasons, and I can hear one of my former teachers whispering in my ear that Christians definitely shouldn’t be, because it is a shorter step than we realize from the magnificent funeral we just witnessed to the near-fascist Christian nationalism of people like U.S. Rep. Lauren Boebert (R-Colo.). 10.2.22

October 1, 2022:
Lauren Boebert says God told her to run for Congress because her win will lead people to embrace Jesus: “God told me it would be a sign and a wonder to the unbeliever.”
This is the same Lauren Boebert who recently read in public from Romans 1:28-32, “Since they didn’t bother to acknowledge God, God quit bothering them and let them run loose. And then all hell broke loose: rampant evil, grabbing and grasping, vicious backstabbing. They made life hell on earth with their envy, wanton killing, bickering, and cheating.” But when Boebert hit the word “wanton,” she pronounced it as “wonton.”
She abruptly (and seriously) tells her audience, “I don’t know what a wonton killing is. I’m gonna have to look that one up. But it sounds interesting. And I don’t think I want to be a part of it.”
For the record no one has ever been killed by a wonton.
​Aug 10, 2022: Baptist News Global: ​Christian nationalism is a danger to our nation
​It is time to defend Christianity from Christian nationalists.
This term distorts the message of Jesus and endangers one of the basic liberties provided to every American in the Bill of Rights. Congresswoman Lauren Boebert (R-Colo.) recently gave voice to this movement when she asserted that “the church should direct the government. The government is not supposed to direct the church. … I’m tired of this separation of church and state junk.” 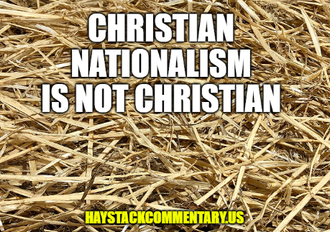 ​Rep. Lauren Boebert, a Republican from Colorado, recently said, “The church is supposed to direct the government. The government is not supposed to direct the church.” Boebert called the separation of church and state “junk.”
Many Christian nationalists repeat conservative activist David Barton’s argument that the Founding Fathers did not intend to keep religion out of government.
As a scholar of racism and communication who has written about white nationalism during the Trump presidency, I find the amplification of Christian nationalism unsurprising. Christian nationalism is prevalent among Trump supporters, as religion scholars Andrew Whitehead and Samuel L. Perry argue in their book “Taking Back America for God.”..............The catalyst for the growth of militia activity among contemporary Christian nationalists stems from two events: the 1992 Ruby Ridge standoff and the 1993 siege at Waco.
At Ruby Ridge, former Army Green Beret Randy Weaver engaged federal law enforcement in an 11-day standoff at his rural Idaho cabin over charges relating to the sale of sawed-off shotguns to an ATF informant investigating Aryan Nation white supremacist militia meetings................In the Waco siege a year later, cult leader David Koresh and his followers entered a standoff with federal law enforcement at the group’s Texas compound, once again concerning weapons charges. After a 51-day standoff, federal law enforcement laid siege to the compound. A fire took hold at the compound in disputed circumstances, leading to the deaths of 76 people, including Koresh.
​Aug. 6, 2022: KRQE:After Trump, Christian nationalist ideas are going mainstream – despite a history of violence

June 7, 2022:
The Colorado Springs Gazette newspaper has endorsed Rep. Lauren Boebert, R-Colo., in the June 28 Republican primary. When I lived in Colorado Springs I used to love the Gazette. It leaned Libertarian. Apparently it now endorses the insanity. Colorado Springs has been becoming a bit of a right wing haven for quite a few years now. Appears they have now jumped the shark.

During a recent flight in the United States, a group of fundamentalist evangelical Christians decided to proselytize by getting in the aisles and singing Christian songs. Rep. Ilhan Omar of Minnesota noted the double standard, implying that the evangelicals would have been treated much differently had they been Muslims..............Omar has had a lot to say about religion. When far-right Rep. Lauren Boebert of Colorado described Omar as a member of the “jihad squad” in 2021, Omar was quick to call out her Islamophobia. Omar, in fact, identifies as a feminist and embraces a very non-fundamentalist, non-jihadist form of Islam. And contrary to what Boebert would have us believe, Omar isn’t trying to impose Shariah law in the United States. 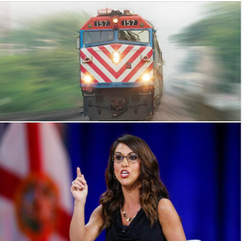 ​
​Lauren Boebert says that when people call her dumb it only makes her stronger.

By tomorrow she should  be able to stop a train with just her index finger. 😎
Nov 26, 2021: ABC News: Rep. Lauren Boebert issues apology for anti-Muslim remarks about Rep. Ilhan Omar
Rep. Lauren Boebert (R-Colorado) issued an apology on Friday for remarks she made that used anti-Muslim tropes to refer to Rep. Ilhan Omar, a Democratic representative from Minnesota and one of only three Muslim members of Congress.
Nov 25, 2021: Hill Reporter: WATCH: Lauren Boebert’s Racist ‘Jihad Squad’ Attack On Ilhan Omar
Lauren Boebert has made her feelings about Ilhan Omar well-known. She’s obviously got strong political opposition to Omar and other Democrats, but attacking her for her background as a Somali refugee and her religious beliefs is also high on the right-wing agenda, and Boebert does not shy away from the opportunity.
Sept 27, 2021: Texas News Today: DHS Secretary Alejandro Mayorkas admits 1 in 5 migrants to US have an ‘illness’
Lauren Boebert, a Republican from Colorado, also criticised Mayorkas, apparently comparing the release of untested Haitians to an incident in which a mother claimed her child was kicked off a flight from Colorado to New Jersey for not wearing a mask.
‘Two-year-olds are getting forced off planes for not wearing masks while Mayorkas just released 12,000+ illegals into the country without so much as a COVID test.
Aug 28, 2021: Jerusalem Post: ​GOP congressman compares COVID to Holocaust, prompts intern resignation
Reps. Marjorie Taylor Greene and Lauren Boebert have also done so, along with several lower-level officials who have made similar comparisons across the country in recent weeks.
Aug 10, 2021: LGBTQ Nation: ​Lauren Boebert rages about trans people, vaccines & communism in the military
​Rep. Lauren Boebert said the U.S. military doesn't care about "winning battles" as much as it wants to provide health care to servicemembers and spread communist propaganda.