What has the modern-day Christian church concept of offerings replaced? A burnt offering would be a perfect male from the flock or herd, which would be offered at the door of the Tent of Assembly and whose blood, after being killed, would be sprinkled over the altar by the priest (Leviticus 1: 2-5). Later, the priest would burn the parts of the head, the fat, the entrails, and the feet on the altar (Leviticus 1: 6-9). Turtle doves and pigeons could also be offered as sacrifices (Leviticus 1: 14-17). Baked goods also could be burnt as offering (Leviticus 2: 1-10). There were thank-offerings (Leviticus 3: 1-16), sin-offerings (Leviticus 6: 17-23), and national offerings (Leviticus 6: 2-11). Burnt sacrifices were involved. These are a few examples. Is there a Christian church that follows these practices? Christians will say that Jesus was our once-and-for-all-time sacrifice. They are right. However, these offerings are what is meant in the passage from Malachi.
Church organizations have expenses. How can they be met? There would be no problem if one situation could be overcome. Who comes first in the lives of many Christians? It certainly is not God. The two great commandments stated by Jesus are not kept (Matthew 22: 37-40). Money that is spent on elaborate buildings could be used to assist in the work of missionaries at home or abroad. It could help alleviate the poor. Congregations were not so large in Bible times because they were split into smaller groups. Can this not be done more today? Also, Christians cannot always distinguish between personal needs and personal wants. Again, we have replacement theology.
Since tithes and offerings are decreed in the Mosaic law, should not other aspects of the law be included in Christian practice? Some creatures forbidden for human consumption included the following: swine, any fish that lack fins and scales, any animal that walks on its paws, and all reptiles (Leviticus 11: 3-47). The fat of any acceptable animal was also forbidden for food (Leviticus 7: 22-27). How often do Christians break these laws! There are laws of festivals to be observed (Leviticus 23: 1-44). How many Christians know that they exist and know what they mean, not to mention the observance of them? When has a Christian congregation stoned adulterers (Deuteronomy 22: 20-24)? These are just a few aspects of the law of Moses. Is it not selective use of the Scriptures in picking out one verse of the law, applying man's interpretation of convenience to it, and discarding the rest? How well do Christians really know and understand the Bible, particularly the Old Testament? Christians tend to have the attitude, "What can the church do for me?" rather than, "What can I do for the church?" In the second case, I am using the term church to mean the people who have accepted Jesus. Here is more replacement theology. --Tyndale Archive 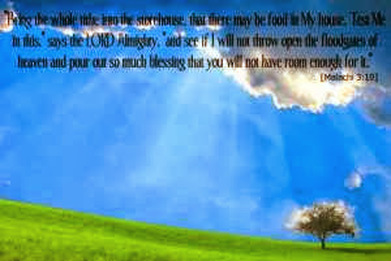 Not only did the people bring the Lord defective sacrifices, but they failed to bring tithes and offerings commanded by the law. Consequently, He cursed their blessings and destroyed their crops. When we rob God, we only rob ourselves. We cannot keep anything that rightfully belongs to God.
This text has often been used to promote tithing, and rightly so, but th usual emphasis is on the blessing which follows tithing and too rarely on the curse which marks its absence. But this is not all. What God plainly requires is “their and offerings.” The tithe is His tax, the offering is evidence of gratitude for His care and mercy. Because God is Lord over all things, all men owe Him a tithe as the great landlord. His covenant people are expected to bring Him offerings as evidence of their gratitude. The absence of tithes and offerings results in Gods curse.
​
Emphasize "meat." The place which is considered a storehouse is to provide weighty deep truths about God. Giving your tithe to a social club that runs under the guise of a church is not the same thing.
​
Tithes went, in part, to the poor. The same thing would be true of offerings. And offerings were entirely voluntary — but a man could rob God by refusing to offer them. He would be guilty before God of the sin of theft (greed, covetousness, and so on). But he would not be guilty of the crime of theft. Consider the case of Ananias and Sapphira (Acts 5:1). Peter told them that they could have sold their land, kept all the proceeds at home, sitting on top of the pile cackling like Scrooge McDuck, and they would not have bought the farm, so to speak.

“Whiles it remained, was it not thine own? and after it was sold, was it not in thine own power? why hast thou conceived this thing in thine heart? thou hast not lied unto men, but unto God” (Acts 5:4).

After he sold it, was it not within his power? Yes — as far as the authority of fellow creatures could reach. But could he do whatever he wanted with it, and not have to answer to God? No, of course not.
And this is what I am arguing. When any creaturely entity assumes the prerogatives of the Deity, assuming the power of control over the property of others, that entity has become lawless and wicked. And the Bible does not say, “Thou shalt not steal, except by majority vote.” The Bible does not countenance the notion that two coyotes and a sheep can form a rudimentary democracy, and then vote on what’s for lunch.

If I am walking down the street and encounter someone begging alms, and I have twenty bucks in my wallet, and I receive an unmistakable burden from the Lord to give him that twenty bucks, and I suppress the impulse and walk on, am I being disobedient? Yes. Am I robbing God? Yes. Am I robbing the beggar? No. For if I were, he would have the right to chase me down and take the twenty bucks.
If a woman had her purse snatched by a bicyclist, and fifteen minutes later she pulls into a drugstore parking lot, and that same bicycle is outside with her purse hanging on the handle bars — the thief having run inside to buy smokes with some of her dollars — is she stealing if she takes her purse back? Of course not.

When we make something a crime without scriptural justification, and penalize it, we invert the order of God. When we make property ownership a crime, and fine people heavily for being guilty of it, we have a society as corrupt and as mendacious and as greedy as . . . well, as our own.

If we love people, if we love our neighbors, we will consider their stuff inviolate. We will form governments that respect our neighbors’ property as much as we ourselves do. But as it is currently, we form the kind of government we now have because we the people have larceny in our hearts. We are governed by thieves who represent us well.
(SOURCE: Blog & MaBlog)
​
​
“Dr Witherow most admirably says in words which it would do us good to ponder: ‘When told by sceptics that we are bound by the Bible to pay tithes, to execute the idolater and blasphemer, to put the Sabbath-breaker and witch to death, our answer is that the apostolic decree sets entirely free from these and all other peculiarities of the old Jewish economy. They are not names among the exceptions, and therefore are of no biding force upon the Gentile believers (p.193)'”
BB Warfield “The Presbyterian Review, Volume 10” p.332; 1888


“The New Testament nowhere explicitly requires tithing to maintain a ministry or a place of assembly.”
Bruce Metzger “Oxford Guide to Ideas and Issues of the Bible” p.493


“Not even the most ardent tither would say that the Sabbath should be observed today because it was observed before the law (Exodus 16:23-36), yet this is the very reasoning used in promoting tithing today. The New Testament teaches us about a new day of worship, and it also gives us new directions for giving. To tithe today following the examples of those who did it before the law would mean that only 10 percent of one’s income would go to the Lord and only on certain occasions; to tithe on the basis of the teaching of the law would mean that 22 percent would be given to the Lord as payment of what was owed Him; but to give on the basis of the principles of the new Testament might mean any percent, and given in recognition that 100 percent belongs to 28 Him. The Lord’s work will never lack support if we preach and practice New Testament principles of giving.”
Charles Ryrie “Balancing The Christian Life” p.92


“Tithing proponents typically fail to recognize that tithing is an integral part of the Old Testament sacrificial system that has been once and for all fulfilled in Christ. Hebrews, Rom 10:4, and Matthew 5: 17-20 all point to this reality. This may be the best reason why tithing is not commanded in the new covenant era: it was fulfilled in Christ.”
David Croiteau “A Biblical and Theological Analysis of Tithing” 2005

“Tithing does appear in the Bible. So, yes, tithing is biblical. But it is not Christian. The tithe belongs to ancient Israel. It was essentially their income tax. Never do you find first-century Christians tithing in the New Testament.”
Frank Viola “Pagan Christianity” 2002


“Today we are living in an age of grace. Under the Mosaic Law, men were required to give one-tenth to God. (Actually, I think that if the Mosaic Law is examined correctly, they not only gave one-tenth but they gave three-tenths.) Today we’re to give on an altogether different standard or basis. That is, we’re not under Law; we’re not under compulsion relative to this matter at all.”
J Vernon McGee “Q&A with McGee”


“why curates are so severe in exacting tithes, since Christ and his apostles took no tithes, as men do now ; neither paid them, nor even spoke of them, either in the Gospel or the Epistles, which are the perfect law of freedom and grace. But Christ lived on the alms of holy women, as the Gospel telleth ; and the apostles lived sometimes by the labor of their hands, and sometimes took a poor livelihood and clothing, given of free will and devotion by the people, without asking or constraining.” ” Paul proved that priests, preaching truly the gospel, should live by the gospel, and said naught of tithes. Certainly tithes were due to priests in the Old Law — but it is not so now, in the law of grace.”
John Wyclife “Tracts and Treatises of John de Wycliffe” 1845 Translation by Robert Vaughan


“In the new covenant. in the new relationship to God through the Messiah, who has fulfilled the law for us; we are not under the law. It is not the primary way by which we relate to God or by which we discern and find strength to do what is pleasing to God. And in its place has come what Paul twice calls the law of Christ. ‘Bear one another’s burdens, and so fulfill the law of Christ’ Galatians 6:2”
John Piper “Is Tithing Commanded for Christians” 9/27/2013
​