June 10, 2014: Variety: Four Questions for ‘Money Honey’ Maria Bartiromo
Maria Bartiromo has earned good ratings with her two new shows, the daily “Opening Bell With Maria Bartiromo” on Fox Business Network and the live “Sunday Morning Futures” on Fox News Channel. Bartiromo, aka “The Money Honey,” burst onto the business-news scene 20 years ago on CNBC, making headlines as the first person to broadcast from the floor of the stock exchange. 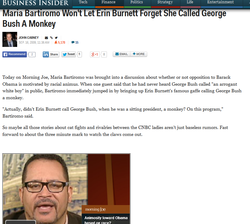 Business Insider: "Maria Bartiromo Won't Let Erin Burnett Forget She Called George Bush A Monkey." "Today on Morning Joe, Maria Bartiromo was brought into a discussion about whether or not opposition to Barack Obama is motivated by racial animus. When one guest said that he had never heard George Bush called "an arrogant white boy" in public, Bartiromo immediately jumped in by bringing up Erin Burnett's famous gaffe calling George Bush a monkey. "Actually, didn't Erin Burnett call George Bush, when he was a sitting president, a monkey? On this program," Bartiromo said." This is an interesting revelation in light of the interview Burnett did with Ted Nugent tonight where she was trying to get Ted Nugent into some kind of a "gotcha" moment over his recent comments. Having viewed the clip with Joe Scarborough this morning, Michael Eric Dyson seems to be hanging out with Al Sharpton too much as he attempts to make pretty much everything a symbol of racism. If he really believes what he says then its no wonder he thinks the whole country is racist (except him and, I suppose, Al). Rational thinking people know better, though.   2.25.14
​Maria Sara Bartiromo (born September 11, 1967) is an American television journalist, magazine columnist and author of three books. She is host of Opening Bell with Maria Bartiromo and is Global Markets editor at Fox Business Network. Bartiromo is a native of New York and attended New York University. She worked at CNN for five years before joining CNBC television. On November 18, 2013, it was reported that Bartiromo will be joining Fox Business Network and Fox News. At CNBC, she was the anchor of the Closing Bell program and the host and managing editor of On the Money with Maria Bartiromo and is credited for becoming the first reporter to broadcast live from the floor of the New York Stock Exchange.  She has appeared on various television shows and been the recipient of various journalism awards including being inducted into the Cable Hall of Fame.