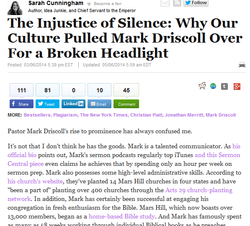 OP-ED BYTES: Mar 10, 2014: First, I am disgusted by some hateful critics' responses to Mark's (Mark Driscoll) behavior. As this Church Leaders article details, for example, Mark has been confronted by armed assailants trying to stab him during a sermon, home break-ins, human excrements left on his doorstep, and social media users posting directions to his house when his wife and children were staying there alone. And secondly, I think people like me are enabling part of the problem. Whether it is because we prefer to keep our distance from inflammatory culture wars or whether it is because we're hesitant to critique someone who still bears some similarities to our mission, some of us who are more moderate have perhaps allowed a tragic silence to be our default response to Mark's pattern of commentary and behavior.Maybe, in fact, one largely untried way to protect Pastor Mark from these attacks is for more people -- particularly moderates and evangelicals like myself who still share some of his beliefs -- to raise a louder voice and to raise it more often. To put Mark's behavior into context more. To underline just as publicly as Mark speaks, that we don't admire some of these insensitive acts or marketing ploys and to stress that sometimes his attitude doesn't represent ours. Maybe instead of trying to pull Mark over on a broken headlight charge by drawing blood over his every media infraction, it would be wise for more people to come clean on what they think his true crime is. Publicly forgetting that Jesus desired mercy, not sacrifice. I believe in Pastor Mark's God. And I wish only well-being for him and his. But despite the potential problems with saying it aloud, I have to tell you, I am one moderate evangelical who is growing increasingly tired of the silence. I hope it is increasingly time for those who are uncomfortable with the way our faith is being represented in these antics to find their voice. (SOURCE: Sarah Cunningham: Huffington Post: "The Injustice of Silence: Why Our Culture Pulled Mark Driscoll Over For a Broken Headlight")

Jan 6, 2009: New York Times: Who Would Jesus Smack Down?
Mark Driscoll’s sermons are mostly too racy to post on GodTube, the evangelical Christian “family friendly” video-posting Web site. With titles like “Biblical Oral Sex” and “Pleasuring Your Spouse,” his clips do not stand a chance against the site’s content filters.
Mark A. Driscoll (born October 11, 1970) is an American pastor and author. He is the founder and current preaching pastor of Mars Hill Church in Seattle, Washington, co-founder of Churches Helping Churches and the Acts 29 Network. Driscoll served as president of the Acts 29 Network, a church planting organization, until 2012. He has contributed to the "Faith and Values" section of the Seattle Times, the "On Faith" section of the Washington Post, and is an opinion writer for the Fox News website. With his wife, he co-authored Real Marriage, which reached #1 on the New York Times Bestseller List in January 2012.