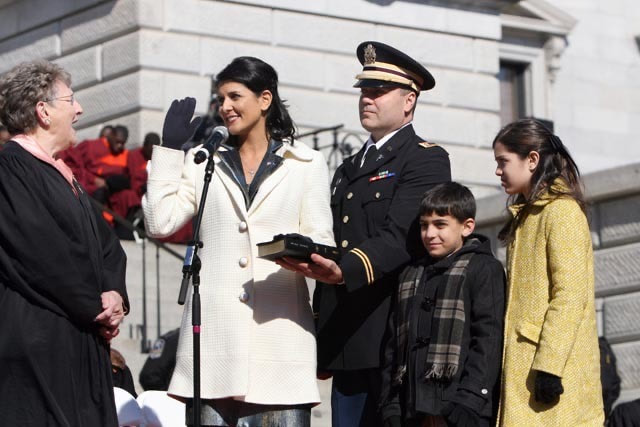 Nikki Haley being sworn in as South Carolina governor.
December 17, 2012: Haley announced she would appoint Tim Scott to replace retiring Senator Jim DeMint, who had previously announced that he would retire from the Senate to become the president of the Heritage Foundation.
August 12, 2013: Haley announced she would seek a second term as governor.
Oct 14, 2014: The first public debate was held in Charleston between Steve French, Tom Ervin, Haley, Morgan Bruce Reeves, and Vincent Sheheen.

November 4, 2014: Haley was re-elected with a 55.9 percent to 41.3 percent win.
October 20, 2014
June 22, 2015:  Haley called for the removal of the Confederate flag from the statehouse grounds. She stated: "These grounds [the State Capital] are a place that everybody should feel a part of. What I realized now more than ever is people were driving by and felt hurt and pain. No one should feel pain...There is a place for that flag. It's not in a place that represents all people in South Carolina."

January 24, 2017: January 24, 2017, by a vote of 96–4, Haley was confirmed by the Senate to become U.S. ambassador to the United Nations. The four senators who voted against Haley were Bernie Sanders (I-Vt.), Martin Heinrich (D-N.M.), Tom Udall (D-N.M.), and Chris Coons (D-Del.). Haley was the first Indian American to hold a cabinet level position.
Haley resigned her position to serve as U.S. ambassador to the United Nations.

January 25, 2017: Haley was sworn in as ambassador by Vice President Mike Pence.

February 2, 2017: Haley declared to the U.N. Security Council that sanctions against Russia for its Crimean conflict would not be lifted until Russia returned control over the region to Ukraine.

March 15, 2017: Haley said she would not support a ban on Muslim immigration to the United States should President Trump choose to enact one. Haley said she did not believe "we should ever ban anyone based on their religion" and that a Muslim ban would be "un-American."

March 30, 2017: Haley stated that the U.S. would no longer focus on forcing Syrian president Bashar al-Assad to leave power. This was a policy shift from former president Barack Obama's initial stance on Assad.

April 5, 2017: Speaking to the U.N. Security Council a day after the Khan Shaykhun chemical attack, Haley said Russia, Assad, and Iran "have no interest in peace" and attacks similar to this would continue occurring should nothing be done in response.

April 6, 2017: The U.S. launched 59 Tomahawk cruise missiles toward the Shayrat Air Base in Syria. Haley called the strike a "very measured step" and warned that the U.S. was prepared "to do more" despite wishing it would not be required.

April 12, 2017: After Russia blocked a draft resolution meant to condemn the Khan Shaykhun chemical attack, Haley criticized Russia, saying "We need to see Russia choose to side with the civilized world over an Assad government that brutally terrorizes its own people."

May 14, 2017: After North Korea performed a ballistic missile test, Haley said Kim was "in a state of paranoia" after feeling pressure from the U.S.

June 4, 2017: Haley reported the United States would retain "sanctions strong and tough when it comes to the issue in Ukraine".

June 7, 2017:  Haley charged the U.N. with having "bullied Israel for a very long time" and pledged the US would end this treatment while in Jerusalem.

June 28, 2017: While appearing before the United States House Committee on Foreign Affairs, Haley credited President Trump's warning to Syria with stopping another chemical attack: "I can tell you due to the president's actions, we did not see an incident."

December 10, 2017: Haley says that any women who speak up about inappropriate sexual behavior “should be heard,” including Trump’s accusers.

December 21, 2017: In a speech in front of the UN General Assembly, Haley warns participating countries that the United States will think twice about funding the world body if it votes to condemn Trump’s decision to recognize Jerusalem as the capital of Israel and move the US embassy there. Despite Haley’s threat, member nations overwhelmingly vote in favor of the resolution condemning the Trump administration for its decision on Israel.

December 31, 2018: Haley voluntarily stepped down as Ambassador.
February 26, 2019: Boeing announces its board of directors has nominated Haley for a seat on the board.

April 29, 2019: Haley is elected to Boeing’s board of directors during the company’s annual shareholder meeting.

November 12, 2019: Haley’s memoir, “With All Due Respect: Defending America with Grit and Grace” is published.
March 19, 2020: Haley stepped down from the Boeing Board of Directors. She states, “I cannot support a move to lean on the federal government for a stimulus or bailout that prioritizes our company over others and relies on taxpayers to guarantee our financial position. I have long held strong convictions that this is not the role of government.”
January 25, 2021: On a Fox News television interview, Haley  declared that she would vote against impeachment, and that "They will bring about impeachment, yet they say they are for unity. They beat him up before he got into office. They are beating him up after he leaves office. At some point, give the man a break. I mean, move on." 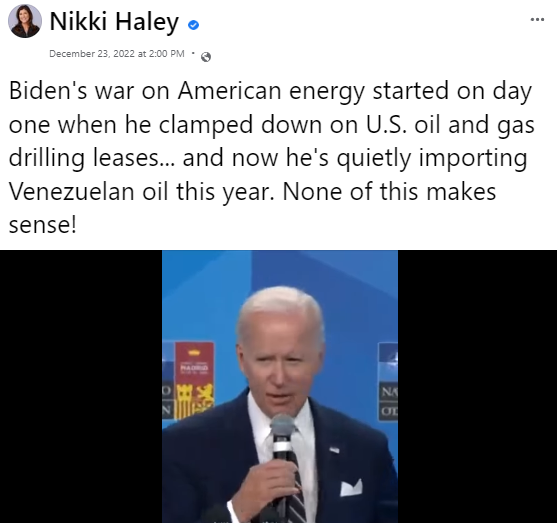