Apr 7, 2015: Dispatches from the Culture War: Robertson: Don’t Play Soccer on Sunday and You’ll Get Rich
At this point, Pat Robertson is like that one uncle or cousin that many families have that comes to Thanksgiving dinner and goes on rambling, incoherent political diatribes that make everyone else roll their eyes.
July 28, 2014: Raw Story: Pat Robertson tells women: ‘Have love in your heart’ for cheating husbands
Televangelist Pat Robertson on Monday advised a woman to forgive her cheating husband because she had been forgiven for “what you did to God.”
May 6, 2014: Firebrand Progressives: Huh? Pat Robertson Concerned About Radical Right-Wingers Hijacking The GOP! (Video)
But when I read Brian Tashman’s report today that Pat Robertson thinks the lunatic fringe of insane right wing-nuts is taking over the republican party, I nearly sprayed my sweet tea right out my nostrils. 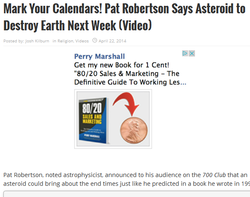 ON THE RECORD: Apr 22, 2014: Josh Kilburn (Americans Against the Tea Party) posted an article titled: "Mark Your Calendars! Pat Robertson Says Asteroid to Destroy Earth Next Week (Video)." I only want to draw attention to one problem with the story and that is that Pat Robertson did not say an asteroid will destroy the earth next week. In fact, Kilburn quoted what Robertson said, and even that shows Robertson did not say that. What Robertson said was basically that he did not know: "It could be next week, or it could be a 1,000 years from now, but nevertheless we want to be ready at whatever time the Lord says ‘I’m wrapping it up, it’s time to come home.’" No date attached.
Apr 9, 2014: Huffington Post: Pat Robertson Calls Obama 'An Absolute Disaster': 'Pray To Be Delivered' From Him
On Tuesday, Robertson blasted Obama as an "absolute disaster," warning people of all party affiliations that action must be taken against him.
Mar 31, 2014: Jalopnik: Pat Robertson Knows We Jews Are Too Busy Diamond Polishing To Fix Cars
My valet shoved away some of the piles of money I use to shield my eyes from all the gold-reflections in my home and placed an iPad in front of me. On it was a clip of Pat Robertson talking about how Jews never tinker with cars, and how we're too busy polishing diamonds.
Mar 28, 2014: The Blaze: Pat Robertson Says ‘Jesus Would Not Have Baked’ Wedding Cakes for Gays
As debate continues to rage over whether Christian business owners should be legally protected in refusing to provide wedding services for gays and lesbians, televangelist Pat Robertson weighed in Wednesday on why he believes Jesus wouldn’t have baked wedding cakes for gays.

Mar 13, 2014: Raw Story: Pat Robertson: God shut off D.C. power as a ‘fun’ way to punish Dems for climate lies
Television preacher Pat Robertson on Thursday explained that God had caused a brief power outage in Washington, D.C. to mock Senate Democrats who held a late-night discussion about climate change.
Mar 11, 2014: Raw Story: Pat Robertson: Demons get ‘permission’ to wreck your car from X-rated movies
Televangelist Pat Robertson warned a viewer on Tuesday that watching horror entertainment shows like The Walking Dead or pornography could allow “demons” to wreck her car.
Mar 5, 2014: Wonkette: Pat Robertson Fine With Cousins Marrying Just As Long As They Don’t Make ‘Mongoloid’
Babbies
Pat Robertson is at it again, sharing the best possible Christian-y relationship advice out there.
Mar 4, 2014: MediaIte: Pat Robertson Has No Problem with People Marrying Their Cousins, Except…
It’s a question that plagues only a few: is marrying your cousin okay with God? Well, on The 700 Club Tuesday, Pat Robertson said there’s nothing in the Bible against marrying your cousin, the real problem’s gonna be making sure that if you have a baby, it doesn’t have any significant genetic issues 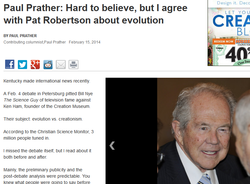 OP/ED BYTE: Feb 18, 2014: Paul Prather (Lexington Herald Leader), in light of the debate between Ken Ham and Bill Nye on evolution, wrote: "I was blindsided by Christian TV personality Pat Robertson.  He's about the most conservative evangelical guy on this planet. Possibly for several planets around. Yet it turns out he's not a strict creationist like Ham, who holds that the Earth was created, as-is, by God in six 24-hour days, a few thousand years ago.  Instead, Robertson believes the world's life forms evolved over tens of billions of years, as Nye does. He said the science behind evolution is indisputable.  "To say that it all came about in 6,000 years is just nonsense," Robertson declared on The 700 Club. "Let's be real," he added. "Let's not make a joke of ourselves." He does assume God was behind the Big Bang: "I believe that God started it all, and he's in charge of all of it." (Hard to believe, but I agree with Pat Robertson about evolution)
Feb 17, 2014: Raw Story: Pat Robertson: ‘Keep your mouth shut’ after having sex with transsexuals
Televangelist Pat Robertson has some advice for men who have sex with transsexual women: “Keep your mouth shut.”
Feb 10, 2014: Salon: Right-wing pastor Mark Creech accuses Pat Robertson of “blasphemy” for rejecting young-earth creationism
Pat Robertson's belief that the earth is more than 6,000 years old is losing him friends on the religious right
Feb 8, 2014: AlterNet: 10 Right-Wing Psychopaths' Vitriol this Week—That Somehow Made Pat Robertson Look Reasonable
1. Pat Robertson: Voice of reason? Truly, we must have entered the end times. The day after creationist Ken Ham denied reality for several hours in a “debate” with Bill Nye about evolution and the age of the earth, Pat Robertson implored Ham to shut-up, because he’s making fundamentalist Christians look stupid. It appears that Pat Robertson has allowed his brain to be corrupted by a little bit of science. Now his head might explode. 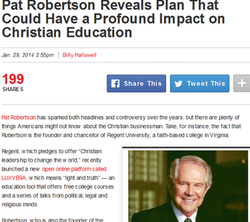 ON THE RECORD: Jan 29, 2014: Billy Hallowell (The Blaze) reports that "Pat Robertson Reveals Plan That Could Have a Profound Impact on Christian Education." Pat Robertson is the founder and chancellor of Regent University, a faith-based college in Virginia. Hallowell reports: "Regent, which pledges to offer “Christian leadership to change the world,” recently launched a new open online platform called LUXVERA, which means “light and truth” — an education tool that offers free college courses and a series of talks from political, legal and religious minds." The platform is currently free for anyone who wishes to gain access and new classes will be added in February. "Eventually, Robertson said the goal is to have “courses that will lead to a four-year baccalaureate degree. LUXVERA, he said, was created to meet the widespread demand for college education that exists around the globe."
CBNN1: Pat Robertson’s New Online Platform, LUXVERA, Will Transform Christian Education
Christian Post: Pat Robertson's Regent University Partners With TD Jakes for Education Initiative
National Review: Pat Robertson Joins the MOOC Revolution
The College Fix: Pat Robertson Launches Free Online College
Jan 9, 2014: Huffington Post: Pat Robertson Apparently Healed A Man's Toothache Through The TV (VIDEO)
Conservative Christian Pat Robertson has done and said many colorful things over his long career as host of the Christian Broadcasting Network's "The 700 Club." Now it appears he'll be adding "healed a viewer’s toothache through the television" to the list.
Aug 2, 2013: Transadvocate: LifeSiteNews’ Ben Johnson misrepresents “Christian position” on transgender people, fails to actually cite the Bible
-Ben Johnson of LifeSiteNews is in a tizzy over Pat Robertson’s declaration that transgender people altering their bodies is not a sin and thus he will not condemn it. Johnson cites multiple sources attempting to condemn transgender people.
June 11, 2013: Raw Story: Robertson: Boy Scouts being destroyed by gay ‘kids who want to do sex with each other’
Televangelist Pat Robertson is accusing LGBT people of trying to destroy “traditional marriage” and the Boy Scouts of America for “a few kids who want to do sex with each other.”
May 17, 2013: CNN: Pat Robertson shrugs off adultery, CBN regrets the misunderstanding
The Christian Broadcasting Network regrets the misunderstanding. Again. Pat Robertson, the network's 83-year-old founder, was not condoning adultery when he answered a viewer's quesion on "The 700 Club" this week, the network said.
Apr 11, 2013: Daily Banter: What is Pat Robertson Smoking?
The marijuana advocate and End-Times Evangelist believes the United States should not pursue peace in the Middle East, because giving concessions to Palestinians will incur “The wrath of Almighty God to fall on this nation”.

Apr 2, 2013: Raw Story: Pat Robertson blames viewer’s ‘negative attitude’ for their chronic illness
700 Club host Pat Robertson blamed an anonymous viewer’s attitude for their problems dealing with chronic illness in a viewer mail segment on Tuesday
Apr 22, 2012: Down with Tyranny: Right Wing Watch Exposes The Mythical Martyrdom Of Jerry Boykin
-If you want to keep an eye on what the most dangerous far right elements in public life-- the David Bartons, Pat Robertsons, Matt Barbers, Cindy Jacobs, Glenn Becks, Bryan Fischers, Ted Nugents, the Phyllis Schlaflys-- are up to when they think no one is looking... well People For the American Way's Right Wing Watch is looking.
Nov 23, 2011: Politico: Pat Robertson isn't a mac and cheese guy
Former Secretary of State Condoleezza Rice was asked about her favorite thing to eat at Thanksgiving in a recent interview with Kristi Watts of “The 700 Club.”
Sept 15, 2011: ABC News: Pat Robertson Says Alzheimer's Makes Divorce OK
Religious broadcaster Pat Robertson stunned "700 Club" viewers Tuesday when he said divorcing a spouse with Alzheimer's disease was justified.
Jan 14, 2010: News Real Blog: NRO’s Peter Wehner Schools Pat Robertson on Christian Theology
As news began to pour in yesterday from Haiti, my thoughts turned to Mission of Hope , an orphanage-school which friends of mine volunteered at.  I wondered about their safety, the safety of the children and staff, and the condition of the ministry’s infrastructure.  I thought about the country, the stories I’d heard, the history I’ve studied, and, then…I heard Pat Robertson’s statement.
Nov 30, 2006: Right Wing Watch: Robertson and O’Reilly: Take Cover! We're 'Under Assault' in the 'Battle for Christmas
Pat Robertson told his “700 Club” audience today that, while “the liberals laugh and say, ‘Oh, that’s not true’” about the “War on Christmas,” “We have been under assault.” In particular, Robertson said, “stores that have always said ‘Merry Christmas’ are now being forced to say ‘Happy Holidays.’” Watch the video segment: Broadband or Dial-Up. Robertson brought on a special guest to explain the meaning of the “War on Christmas”:
Marion Gordon "Pat" Robertson (born March 22, 1930) is an American media mogul, executive chairman, and a former Southern Baptist minister, who generally supports conservative Christian ideals. He presently serves as Chancellor of Regent University and Chairman of the Christian Broadcasting Network. Robertson has a career as the founder of several major organizations and corporations as well as a university: The Christian Broadcasting Network (CBN), the International Family Entertainment Inc. (ABC Family Channel), Regent University, the American Center for Law & Justice (ACLJ), the Founders Inn and Conference Center, the Christian Coalition, a Boeing 757 Flying Hospital, Operation Blessing International Relief and Development Corporation, and CBN Asia. He is a best-selling author and the host of The 700 Club, a Christian News and TV program broadcast live weekdays on the ABC Family Channel via satellite from CBN studios, as well as on channels throughout the United States, and on CBN network affiliates worldwide.

The son of U.S. Senator A. Willis Robertson, Robertson is a Southern Baptist and was active as an ordained minister with that denomination for many years, but holds to a charismatic theology not traditionally common among Southern Baptists. He unsuccessfully campaigned to become the Republican Party's nominee in the 1988 presidential election. As a result of his seeking political office, he no longer serves in an official role for any church. His media and financial resources make him a recognized, influential, and controversial public voice for conservative Christianity in the United States.