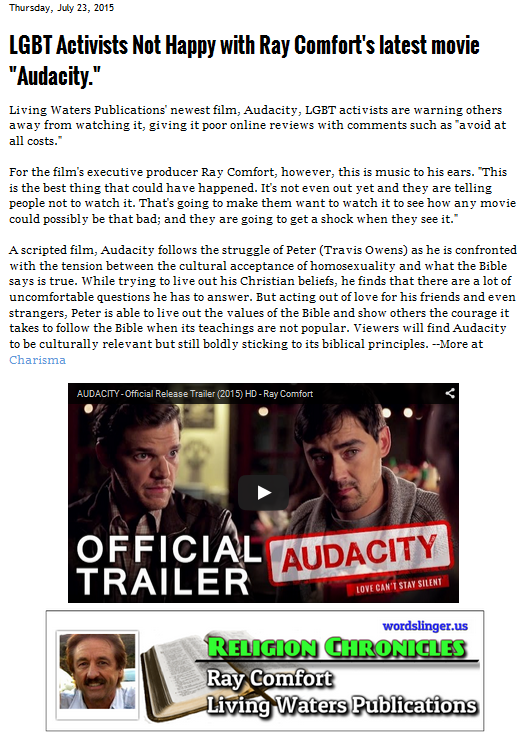 Aug 20, 2013: Friendly Atheist: An Interview with Creationist, Filmmaker, and Banana-Enthusiast Ray Comfort
Nearly four years ago, I interviewed him for this website and he was gracious enough to answer all the questions I asked.
Dec 18, 2012: Notes From a Retired Preacher: Berean Call Promoting – Not Only Calvinism But Now – The Terrible Lordship “Salvation” of Ray Comfort!
We have mentioned here at ExPreacherMan.com how Dave Hunt’s ministry, The Berean Call has been compromised by promoting and favorably quoting Calvinists and Arminians in their weekly newsletters.

According to Comfort, he left high school at 17, worked in a bank, and began a successful business when he was 20; he says he converted to Christianity on 25 April 1972, when he was 22. He then began seven years training at a local church, after which he was ordained as a full-time pastor. Comfort then spent three and a half years pastoring in Christchurch, New Zealand, and 12 years preaching open-air in the city's Speaker's Corner. He has no formal training nor theological degree. In his mid-20s, he began receiving invitations to speak internationally. In 1989, he accepted an invitation to join the pastoral staff at the non-denominational Calvary Chapel in Southern California. Comfort identifies himself as a Jew.