“The truth of a teacher’s words is determined not by the feats he can perform but by the orthodoxy of what he teaches. We are never to follow anyone who perverts the truth of God’s Word, no matter how gifted that person is..."
- R.C. Sproul

Jan 23, 2010: Youtube: R.C. Sproul - Does God desire all men saved?
Mark Driscoll asks great theologian R.C. Sproul about 1 Timothy 2:4; Does God want all men saved? This is a must see.
“By His life, death, and resurrection, our Savior has conquered our enemies, and by His Spirit He has granted us to share in the victory.” – R.C. Sproul
May 21, 2008: Creation Ministries: Famous evangelical apologist changes his mind
RC Sproul is a well-known evangelical scholar who has authored some 60 books and produced an enormous selection of other resources such as audio tapes and videos. According to Ligonier Ministries, founded by Dr Sproul,  he has degrees from Westminster College, Pennsylvania, Pittsburgh Theological Seminary, and the Free University of Amsterdam. 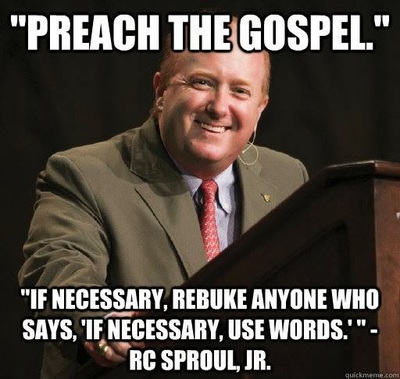 “The very heart of worship, as the Bible makes clear, is the business of expressing, from the depths of our spirits, the highest possible honor we can offer before God.” – R.C. Sproul
May 21, 2008: Old Testament Studies: R. C. Sproul’s Literal Interpretation of Genesis 1
After my conversion in the late 1960s, I remember hearing Dr. R. C. Sproul speak on a number of occasions. Back in those days as a Freudian Psychology major in college, Sproul’s Calvinistic teaching was something of a theological electroshock therapy for my man-centered perspective on life
“We may live in a culture that believes everyone will be saved, that we are ‘justified by death’ and all you need to do to go to heaven is die, but God’s Word certainly doesn’t give us the luxury of believing that.” – R.C. Sproul
Robert Charles Sproul (born February 13, 1939) is an American Calvinist theologian, author, and pastor. He is the founder and chairman of Ligonier Ministries (named after the Ligonier Valley just outside of Pittsburgh, where the ministry started as a study center for college and seminary students) and can be heard daily on the Renewing Your Mind radio broadcast in the United States and internationally. "Renewing Your Mind with Dr. R.C. Sproul" is also broadcast on Sirius and XM satellite radio.  In late July 2012, a new 24-hour online radio station called RefNet (Reformation Network) was also announced by Ligonier Ministries in an effort to reach "as many people as possible" where Internet access is available. Ligonier Ministries hosts several theological conferences each year, including the main conference held each year in Orlando, FL, at which Sproul is one of the primary speakers. Sproul was passenger on the Amtrak train that derailed in the 1993 Big Bayou Canot train wreck and often gives firsthand accounts of the story.