google-site-verification: googlefa8d7df4524a1962.html
TWO BITS MEDIA OF SOUTH MISSISSIPPI
Apr 15, 2015: Paperback Theology: How Do You Fire Thomas Jay Oord?
Oord is one of the highest profile, and well respected theologians in the Church of the Nazarene. He’s a brilliant and popular teacher, a prolific writer, and is well respected among his peers–including theologians of all stripes. Oord has also been dedicated to the COTN serving on all kinds of committees and boards, providing theological/philosophical defense some of their signature doctrines.
Apr 2015: Christianity Today: Pro-Evolution Tenured Professor Laid Off From Nazarene University
Theology professor Thomas Jay Oord, who has taught at Northwest Nazarene University (NNU) in Idaho, for over a decade, was laid off at the end of last month.
Jan 21, 2010: Reformed Nazarene: False Teaching Welcomed At NorthWest Nazarene University
Northwest Nazarene University has its own Dr. Tom Oord as a professor there.  He is known for his support and advocacy of the twin heresies of Open Theism and Process Theology.  At the lecture, you will see Dr. Oord later towards the end as he walks around with a microphone for questions for the audience.  I had been to a lecture by Dr. Oord at Eastern Nazarene College, where he spoke as a guest speaker.  I challenged him on some issues related to death and how it came into the world, and I recall that his response to me when I quoted Romans 5:12 as the reason why death came into the world, was that he disagreed with me on that answer.  Dr. Oord also supports evolution and does not believe in the biblical account of creation.  If I am wrong, I hope he can correct me on that.  (Disclaimer: not all professors at NNU  have bought into this emergent/contemplative ideology, but NNU is a hotbed of emergent and contemplative false teachings). 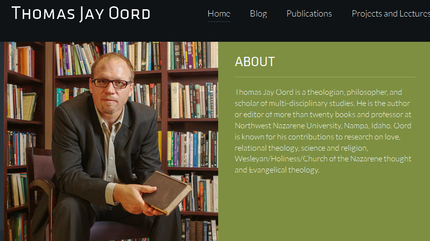 Thomas Jay Oord is a theologian, philosopher, and scholar of multi-disciplinary studies. He is the author or editor of more than twenty books and professor at Northwest Nazarene University, Nampa, Idaho. Oord is known for his contributions to research on love, relational theology, science and religion, Wesleyan/Holiness/Church of the Nazarene thought and Evangelical theology. Oord was raised on a farm in the small farming community of Othello, Washington. He attended Northwest Nazarene College and graduated in 1988. After four years in pastoral ministry in Walla Walla, Washington, he attended Nazarene Theological Seminary in Kansas City, Missouri. Upon graduating with a Masters of Divinity, he attended Claremont Graduate University in Southern California. He earned a Masters of Arts in Religion and a Ph.D. at Claremont.

While pursuing graduate studies, he was a part-time associate pastor in Bloomington, Ca. Oord taught philosophy at Eastern Nazarene College for three years. In 2002, he returned to the Northwest to teach at his undergraduate alma mater. He teaches undergraduate and graduate students at Northwest Nazarene today. Oord is an ordained elder in the Church of the Nazarene and attends The Table Church of the Nazarene. He serves in various consulting and administrative roles for academic institutions, scholarly projects, and research teams. He and his wife, Cheryl, have three daughters.