Oct 3, 2021:
"If you’re going to take over the administrative state and deconstruct it, then you have to have shock troops prepared to take it over immediately" Steve Bannon told GOP members at an event on Wednesday what the next GOP President has to do to to take over the US government. He predicts certain wins in 2022 and then 2024 to make the coup successful. This time they will "have a MAGA perspective, MAGA policies, not the standard Republican policies." What Steve Bannon is doing is essentially plotting treason and sedition on the USA. Where is the DOJ on this? As long as they go about their coup unobstructed they are empowered to do more til the USA becomes the country formerly known as the USA.​ But who will enforce the laws??

​GOP Conundrum:
So will Republicans wear masks or take off the ones they are wearing for Halloween?

Oct 1, 2021: New American: 49 GOPers Vote to Stick Taxpayers With Afghan Resettlement Tab: $67K Each for 95K “Refugees”
If one of President Biden’s 100,000 Afghan “refugees” with a fistful of cash and brand new driver’s license runs a red light and kills your family, you should know who to blame. You can start with the 49 Republicans who voted to spend more than $6 billion to import them.

October 1, 2021:
So the Pro Trump Confederates want to succede from the union?. I think they've romanticized it into something they dont understand..but, then again, the delusions have always been strong for them. When I think of a Maga Confederacy of its own the only thing that comes to mind is "The Handmaids Tale". 😳

If you are an American Christian and are more offended if I take a jab at Republicans rather than various Christian doctrines...then you might be a Christian Nationalist. Say three prayers and call God in the morning.

Sept 27, 2021:
The far right wing of the Republican party AND the Christian right has long been a natural magnet to conspiracies. They tend to be reactionaries whether information is true or not. Personally I believe it gives them a sense of power....and once it comes to that point....even reality usually cant stop it. QANonsense highlighted it this last year but Q just took the conspiracies theories that the Right wingers already hold and amplified them and embellished them with stupid. Q may go but conspiracy theories still thrive. If Q did anything good they opened up some people to realizing the conspiracies were there and had been all the time.

There are a couple Supreme Court rulings in the last 60 years that have inspired a more complex network of conspiracy driven Christian Nationalists that now have members sitting in the Congress of the USA. I was inspired this morning to start an article for my website about the Engel v. Vitale (1962) SCOTUS ruling which sits at a foundation of conspiracy driven right wing movements and the move toward Christians moving away from being any influence in Public education...through which they began creating a self-fulfilling prophecy...and maybe a self created monster for them to battle. As I started writing it opened up a lot of things that are realated...so it may end up being longer than I initially thought.

Roe V Wade is another SCOTUS case which created a movement which eventually became the beginning of the Church becoming a Political action Committee.
As a former right winger I pushed all the conspiracies and used the language. Facts were irrelevant...just someone saying something implying this is the way God is moving or that our efforts will defend against the demonic influences in our country. I was also initially converted from atheism/agnosticism into a Charismatic church a decade or two after the beginnings of what the charismatic movement or "latter rain" which would become (mostly not good). 'Charismania" has a larger influence than many understand and tenets have spread into many denominations..especially the Southern Baptists.
More coming soon.
Sept 18, 2021: Minneapolis Star Tribune: ​Reckless COVID talk will hurt, not heal
​Politicians running against "lawlessness" shouldn't actively encourage that same conduct from their supporters.
It's frustrating that a Republican front-runner in the Minnesota governor's race needs to be rebuked for this potentially perilous hypocrisy. But it is necessary as Dr. Scott Jensen, a Chaska physician and one-term legislator, ramps up his campaign to win the GOP nomination and unseat DFL Gov. Tim Walz in 2022.
Sept 11, 2021: Independent: ​How 9/11 changed the Republican Party
​In the summer of 2001, US president George W Bush’s administration considered allowing more than 3 million undocumented immigrants from Latin American countries to secure legal status in the United States.

​GOP Conundrum:
So will Republicans wear masks or take off the ones they are wearing for Halloween?

April 11, 2021:​
Republicans create their enemies in their head (demonizing everybody not like them) and then convince themselves they need to have a gun or change laws to protect themselves from their "demons." It's a paranoia that has long been the rudder that guides them

Theres no such thing as "cancel culture." It's a GOP paranoia from a political party that exchanges growth & reality for QAnonsense and big lies by the former guy. 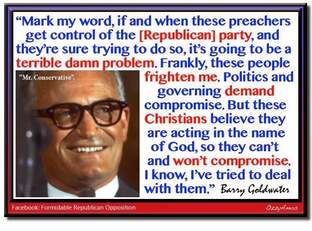 ​This is an actual quote by Barry Goldwater. I understand the sentiment he is conveying but just want to separate Christianity from Christian Nationalism. It has likely been inevitable that the move of Christians into the Republican Party has been ongoing and growing stronger. It was that movement that brought us Ronald Reagan.
The problem is that it has been evolving away from true Christianity into what is now Christian Nationalism. The Christians replaced God as THE answer and mixed God and Republicanism as a duel force. The mix is a really bad dogma that has and will have a bad end. While Christians have long suggested the anti-christ will come from some secular power or a fascist power...little did they notice that they themselves could be ushering an "antichrist" in. Optimistically I say "were" but a lot of them still are. Rather than keeping Christianity separate and holy it allowed politics to absorb it.
Goldwater, from an era when some intellectualism was still a part of "conservatism" saw that. We are seeing where it has come.

79% of accidents happen in the home. Finally, good news for the homeless.

Jan 31, 2021:
​👉I think it's pretty clear now that the Constitution is becoming a prop for most of the GOP. Whenever they lay claim on it they use it in a way to defend their actions regardless of how ethical it is. The very bad thing about that is that they have no foundation for their actions. They become rudderless but with leadership authorities.

👉They did not get here overnight. It's been progressing over the years until now here we are. Trump exemplifies everything that is wrong with American politics.......and the really sad thing is that he may not be THE problem as much as he is just a symptom or a result of the problem.😳😳

👉Freedom of the Press is a foundation of freedom because it was established to keep Government honest. The GOP has avoided that check by only seeking out the press that shares their rudderless views. They seek only yes-men to affirm whatever whim the wind blew into their head on any given day. Turn on Tucker Carlson or Sean Hannity and the best of the worst of the GOP will likely be there getting their egos stroked.

👉Ive thought many times over the last few months that things are so nutty that you just think some adult should step in and set them straight. BUT, they dont have one. The have no accountability. .....not even to their own constituents (unless they are also yes-men....but, of course, that is not accountability.. it's more like subordinate partners in crime).

A young boy was visiting a church for the first time, checking all the announcements and posters on the walls. He came to a group of pictures of men in uniform & asked a nearby usher, "Who are all those men in the pictures?" The usher replied, "Those are our boys who died in the service". Dumbfounded, the youngster asked, "Was that the morning service or the evening service?"😁 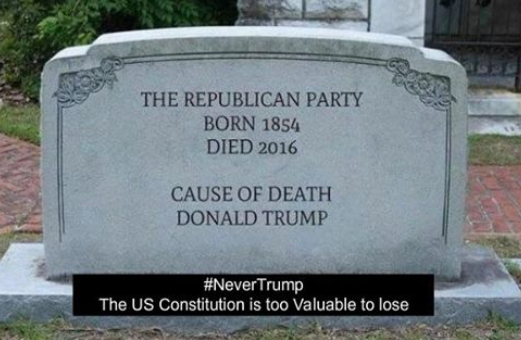 May 7, 2016:
#‎NeverTrump‬ didn't lose this week. . #NeverTrump has never lost & will not lose going forward. It's getting stronger. #NeverTrump ‪#‎NotEvenOnce‬
NOW is the time for all conservatives to stand FOR the Constitution even if it's against the GOP. #NeverTrump
#NeverTrump does stand for something. It stands for sanity. It stands for honor. It stands for the Constitution
The Republican party has long been on the road to failure with conservatives. They are to the point where they even do everything they can to defeat them even though they are members of their own party. The mess that is in DC can be easily blamed on liberal policies and Democrats, but a lot of it is now at the feet of the GOP. In the world of the GOP they think that you are a conservative if you are just slightly right of the left. So as the left moves even further left..so does the GOP establishment. Trump, the current GOP establishment favorite, when asked, did not even know what a Conservative is. And once could write a book about how much Trump does not know about anything at all--from the Bible to the Constitution.

The Republican Party is no place for true conservatives. It's past time to exit. -ZRZ