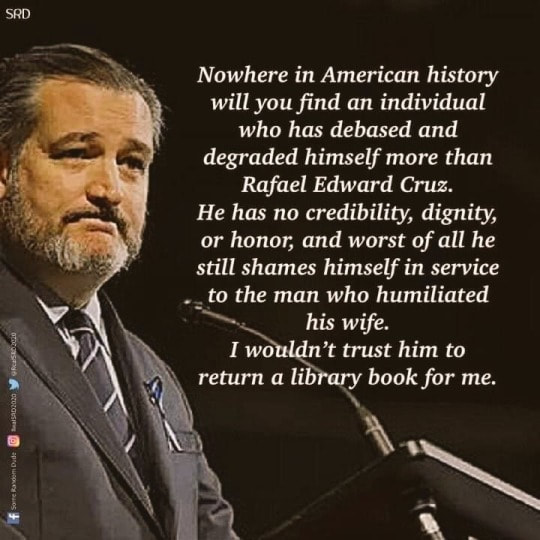 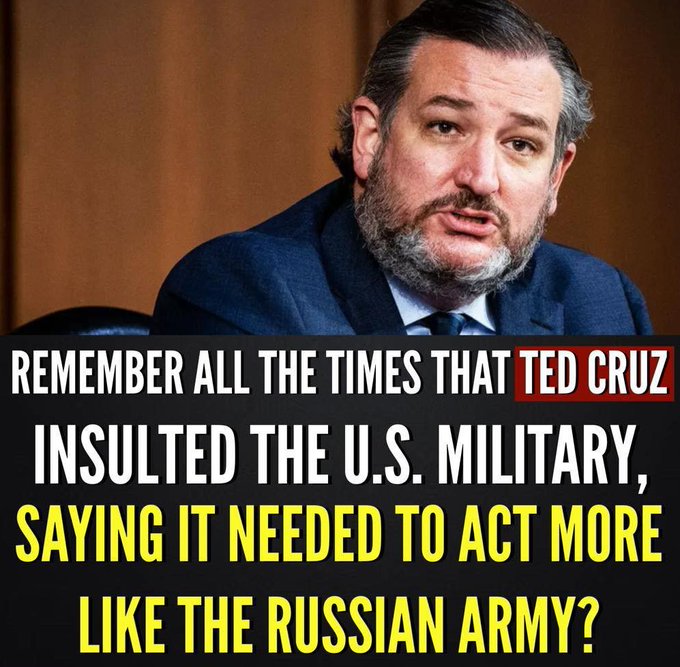 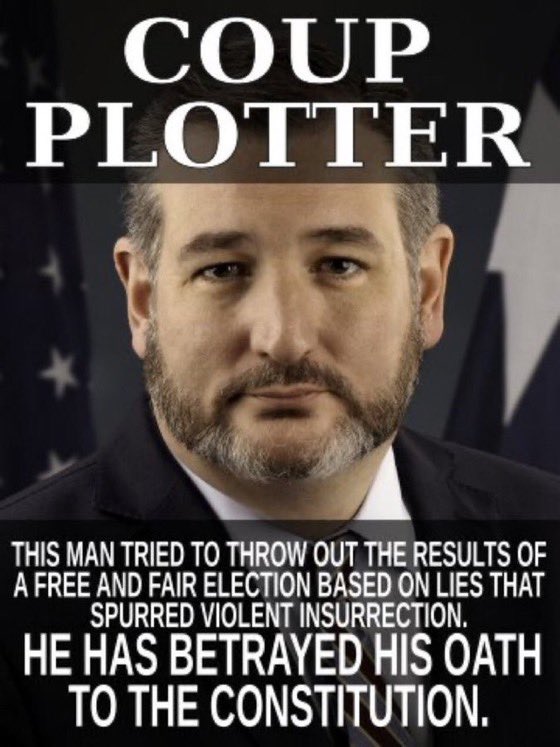 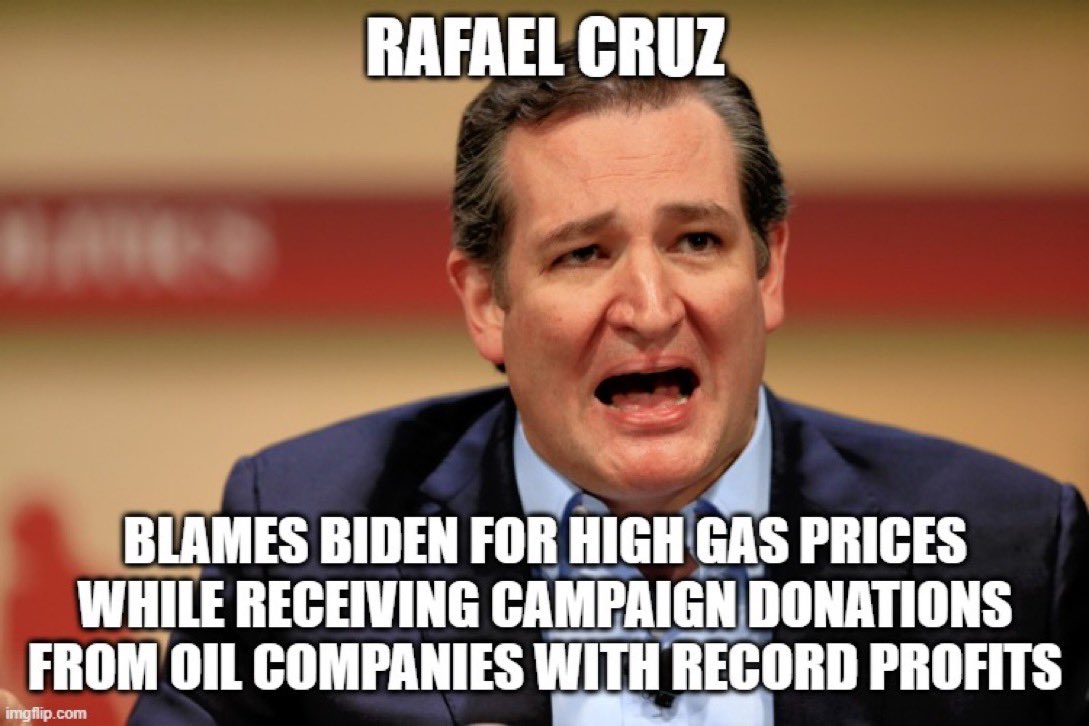 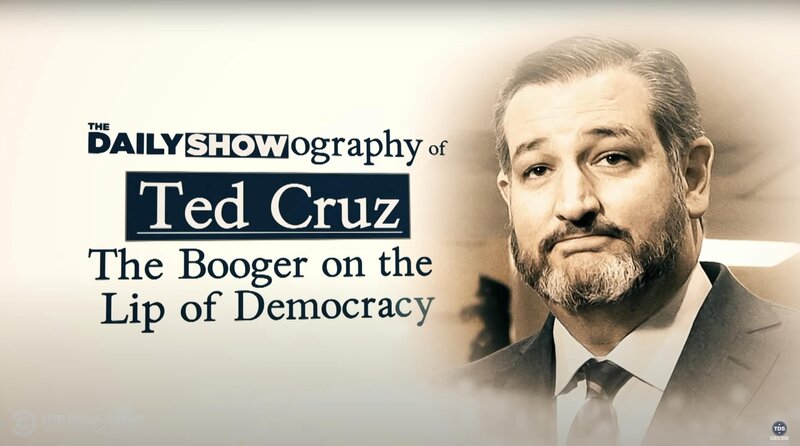 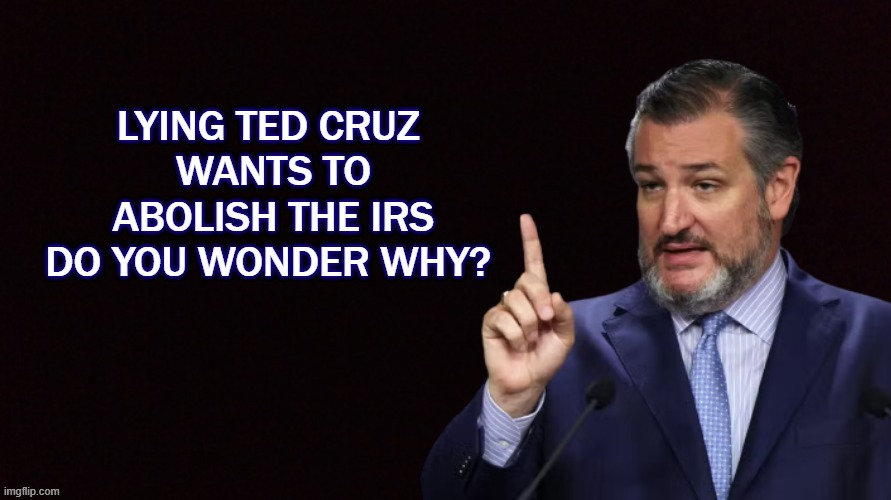 Jan 10, 2022: LGBTQ Nation: ​Ted Cruz’s teen daughter comes out as bisexual
​Sen. Ted Cruz’s (R-TX) daughter, Caroline, has reportedly come out on social media as bisexual while castigating her father’s far-right political views.
In a video posted to TikTok, she also accuses her parents of digitally altering a photo for the family Christmas card to make her clothing look more conservative.

Yesterday, I used a dumb choice of words and unfortunately a lot of people are misunderstanding what I meant. pic.twitter.com/vWCjFnA4t3

Nov 24, 2021: Reveal: Behind the Tweet That Became the Rallying Cry for the Insurrection
Two days after the election, Sen. Ted Cruz (R-Texas) went on Fox News and falsely claimed, “By throwing the observers out, by clouding the vote-counting in a shroud of darkness, they are setting the stage to potentially steal an election.” 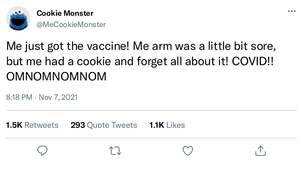 Now Ted Cruz will be going after the cookie monster.
Number of Ted Cruz Republicans who have suffered or died from Covid: too many to count
Number of Muppets who have suffered or died from covid: none.
Oct 3, 2021; Yahoo: Empty Desks at the State Department, Courtesy of Ted Cruz
A bitter fight with Sen. Ted Cruz, R-Texas, over a Russian gas pipeline has created what Biden officials call a personnel crisis, with Cruz delaying dozens of State Department nominees, including 59 would-be ambassadors, and vowing to block dozens more.
Sept 27, 2021: Texas News Today: DHS Secretary Alejandro Mayorkas admits 1 in 5 migrants to US have an ‘illness’
Senator Ted Cruz also slammed what he called ‘Bizarro-world Biden rules’ in a tweet.
He wrote that for American citizens, the rule is to ‘get the vaccine or you’re fired’ but for ‘illegal immigrants’ it’s ‘no testing, no vaccines & being sent to every community in America!’
Sept 23, 2021: Breitbart: Senator Cruz Slams AOC, Dems over Border Crisis: ‘Go See the Biden Cages’
Sen. Ted Cruz (R-TX) ripped Democrats over the border crisis and told them to go see the children in “Biden cages” in a speech in the Senate on September 22.

Sept 17, 2021:
​
Just For J6" Jan 6 rioters "Persecuted" grievances list:
1) No one to shoot at
2) No guns to have no one to shoot at
3) Confederate Flag not allowed
4) Miss living in Moms basement
5)  Rulebreakers have to watch a Rand Paul speech
6) No Maga hat to cover head lice
7) Over 8 months since they've killed a policeman#Blue LivesMatterButOnlySometimes
8) Shocked that QAnon Shamon is just a nerd with no super powers and cant fly
9) No kraken
10) Marjorie Taylor Greene stopped her conjugal visits
11) Jailers wont play Trump saying "Go Home We Love You" so they can sleep at night
12) Sometimes Ted Cruz comes to visit them in person and gives a speech ​
9.22.21
​'You Think The Entire State Of Texas Is Racist?': Ted Cruz Grills Dem Witnesses On Voter ID Laws Best response would have been: No. Just you and your friends, Mr Cruz
Aug 20, 2021: Salon: ​Ted Cruz hired family members to Senate staff, raising eyebrows in Washington
​The hires weren't technically illegal. But ethics experts say they clearly give the appearance of nepotism 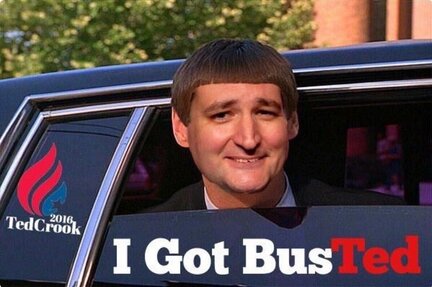 1.7.21: Business Insider: Texas lawmakers call on Sen. Ted Cruz to resign following his push to contest the election results
​Lawmakers and other public officials in Texas are calling for Sen. Ted Cruz to resign over his role in fomenting the baseless conspiracy theories about the 2020 election being stolen from President Donald Trump, which culminated in the storming of Capitol Hill on Wednesday.

If you're using public transport never give up your seat to an old lady. That's how my uncle lost his job as a bus driver.

January 19, 2016:
On the 11 January 2016 edition of CNN's AC360, Washington Post columnist Kathleen Parker revealed her own ignorance of Christian teachings, as she targeted Senator Ted Cruz for something "astonishing" he recently said at a campaign stop: ""I don't think there's any chance Ted Cruz can win a general — and here's why....He said...'It's time for the Body of Christ to rise up and support me.' I don't know anyone who takes their religion seriously who would think that Jesus should rise from the grave and resurrect himself to serve Ted Cruz. I know so many people who are offended by that comment."

Parker went on to assert that "if you want to talk about grandiosity and messianic self-imagery...Ted Cruz makes Donald Trump look rather, sort of, like a gentle little lamb." The former CNN host also contended, "I don't see independents falling in line behind Ted Cruz."
Sept 3, 2013: Ted Cruz comments today:
“Today, judicial lawlessness crossed into judicial tyranny. Today, for the first time ever, the government arrested a Christian woman for living according to her faith. This is wrong. This is not America.
“I stand with Kim Davis. Unequivocally. I stand with every American that the Obama Administration is trying to force to chose between honoring his or her faith or complying with a lawless court decision.
“In dissent, Chief Justice Roberts rightly observed that the Court’s marriage decision has nothing to do with the Constitution. Justice Scalia observed that the Court’s decision was so contrary to law that state and local officials would choose to defy it.
“For every politician — Democrat and Republican — who is tut-tutting that Davis must resign, they are defending a hypocritical standard. Where is the call for the mayor of San Francisco to resign for creating a sanctuary city — resulting in the murder of American citizens by criminal illegal aliens welcomed by his lawlessness?
“Where is the call for President Obama to resign for ignoring and defying our immigration laws, our welfare reform laws, and even his own Obamacare?
“When the mayor of San Francisco and President Obama resign, then we can talk about Kim Davis.
“Those who are persecuting Kim Davis believe that Christians should not serve in public office. That is the consequence of their position. Or, if Christians do serve in pubic office, they must disregard their religious faith–or be sent to jail.
“Kim Davis should not be in jail. We are a country founded on Judeo-Christian values, founded by those fleeing religious oppression and seeking a land where we could worship God and live according to our faith, without being imprisoned for doing so.
“I call upon every Believer, every Constitutionalist, every lover of liberty to stand with Kim Davis. Stop the persecution now.”
A politician is a person who will, without any hesitation, whatsoever, lay down your life for his country.😳